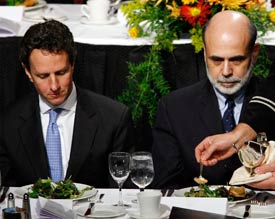 And you thought the Treasury Department’s $700 billion bailout was massive and secretive.

In fact, the Federal Reserve is lending significantly more – $893 billion to a wide range of institutions — in a plan receiving even less public scrutiny, the Washington Post reports.

A leading mastermind behind the lending: Timothy F. Geithner, president of the Federal Reserve Bank of New York and Barack Obama's pick for Treasury secretary.

The Fed’s decision to withhold the names of companies receiving loans, among other key information, has caused a stir. Bloomberg News recently sued the Federal Reserve, seeking to learn what the central bank is accepting as collateral for the loans.

And at a hearing last week, Rep. Spencer Bachus (R-AL) asked Fed Chairman Ben Bernanke: "When do you anticipate letting the public know" what collateral you're taking? His answer: Not any time soon. Bernanke argued that disclosure would be counterproductive. He said that naming the banks and collateral involved would create a "stigma" that would discourage further lending.

So the Fed has kept the details of its activities quiet and at the discretion of its five governors, as well as top officials of the 12 regional Fed banks, according to the Post.

The Fed, meanwhile, continues to dole out funds for a variety of purposes. The Post explains:

As of last week, the Fed's loans included $507 billion to banks, $50 billion to investment firms, $70 billion for money market mutual funds and $266 billion to companies that use a form of short-term debt called commercial paper. It is considering a new program that would make billions more available to prop up consumer lending: auto loans, credit cards and the like.

The Fed’s lending last week was 1,900 times the weekly average for the three years before the current credit crisis, according to a Bloomberg News report. In total, the government is prepared to lend more than $7.4 trillion, or half the value of everything produced in the nation last year, Bloomberg reported. A full breakdown of the $7.4 trillion is listed in a post on Clusterstock.com.

Some of the Fed’s deals could be increasingly risky, the WashingtonPost explained:

The Fed has increased the size of its balance sheet and replaced the ultra-safe U.S. government bonds it normally keeps on its books with loans to banks and others.

Perhaps riskiest of all is the Fed’s decision to accept troubled asset-backed securities as collateral – the same sort of assets targeted by the original design for the Troubled Asset Relief Program. Treasury Secretary Hank Paulson abandoned the plan to purchase the assets, but the Fed’s decision means that banks can still use them to obtain a loan, the Post reports. It’s a strategy that one economist dubs "TARP light."