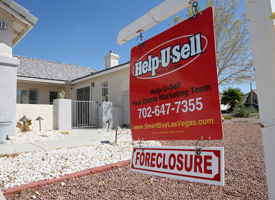 As financial markets stagger from one low to the next, it's easy to forget that the subprime mortgage debacle -- which has been blamed for kick starting the contagion -- still has a ways to run.

More than half a million mortgages, worth about $110 billion, will have their intro "teaser" interest rates reset over the next six months, according the latest available data from First American CoreLogic, a mortgage industry research group.

The majority of these mortgages -- about three quarters of them -- will likely spring to 10 percent interest, which will be unaffordable for many borrowers, said Guy Cecala from Inside Mortgage Finance.

"None of these loans are sustainable at 10 percent. Nobody in their right mind would continue to pay them at 10 percent," Cecala said.

There is a total of $337 billion of subprime mortgages still outstanding, according to First American. Virtually all of these loans were made during the subprime frenzy of 2004, 2005 and 2006, and most reset to higher interest rates two or three years after they were created.

"But nobody ever intended that the loans would ever reset," said Cecala. "In fact, they were always set up so that somebody would refinance."

The problem could be particularly acute since, as FDIC chief Sheila Bair recently noted, the government's big bailout contains no provisions to address foreclosures. Meanwhile, now that credit has dried up, it will be hard for homeowners to refinance.

The mere fact that interest rates will leap does not necessarily mean that foreclosures will follow. Only a fifth of subprime mortgages that have already reset have gone into some sort of bankruptcy or foreclosure process, according to data provided to us by the Department of Housing and Urban Development.

There are, however, some indications that many of these mortgages may go bad.

A large number of borrowers still on the low "teaser" rates are already falling behind on payments -- one in seven is between 30 and 90 days late, according to HUD. The figures are worse for mortgages whose rates have already changed -- more than a fifth of those are behind. These borrowers have not yet gone into foreclosure, but if they do not start to make repayments, they might.

The new rates are calculated by adding six percent to the bank lending rate -- LIBOR -- which is currently about four percent, adding up to 10 percent.

"We're not particularly well set up to deal with the resets," Cecala said. "Why don't we just freeze them? That seems like a no-brainer."