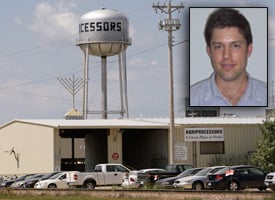 On May 26, 2006, the venerable New York-based Jewish weekly The Forward published a hard-hitting story by reporter Nathaniel Popper that detailed appalling labor practices at the nation's largest kosher meatpacking plant, Agriprocessors. Since then, the Forward's sustained coverage of the kosher food industry has roiled the religious Jewish community. Almost two years after his initial report, the U.S. Immigration and Customs Enforcement raided Agriprocessors, catapulting Popper’s story onto the front pages of newspapers everywhere.

What follows is an edited transcript of our conversation with Popper.

What were some of the challenges in covering undocumented workers in a tough labor situation?

Obviously the biggest thing which any writer in this sort of context will tell you is that these workers are scared out of their minds in so many ways. And so they are not going to want to talk to somebody who says they are going to put their name in a newspaper. Even when you say that you are going to be anonymous.

For me -- and I think this is something probably that a lot of reporters in this field deal with -- there was the moral difficulty of contending with the fact that by writing about somebody or some group of people you may alert the government to their presence and get them deported, if not worse. In this case, it was in fact worse than just getting deported.

Do you think there was a connection between your reporting and the subsequent ICE raid in Postville?

It's hard to know, but on the most basic level the warrant cited our reporting. From what I've heard, I think the government was aware of this plant before I started reporting on it. We didn't start writing about this because we heard that there were undocumented workers there. We started writing about it because of what we heard about how the workers were being treated. There was a lot of back and forth and a lot of discussion about what the consequences might be for the people, even if none of them gave their name on the record.

In approaching this story, were there things that you could do that the non-Jewish press could not?

I sense talking to other reporters that to some degree people weren't willing to go to these places, to write about these things. I don't know whether it was because of the fear of being accused of anti-Semitism or the sense that they don't really have the background to understand how this place fits into the larger framework of Jewish life. One of the frustrating things early on and actually one of the ongoing frustrations was that when we reported on this for the first year, I kept expecting that somebody else was going to pick up this story. Orthodox or right-leaning Jewish newspapers criticized us. But almost no mainstream newspapers took up this story. I sort of would have expected that somebody would have picked it up even at the level of there is this fight between all of these newspapers.

Why do you think that didn't happen?

It's a question I've asked myself a lot since this plant was raided and this company has been on the front page of the New York Times. It has been in every major news outlet. When the government did this, it allowed all these people to write about these issues in a way that I guess when it was the Forward's word it wasn’t enough. But of course, they didn't take the time to check these things out before.

Since the raid, the coverage by the mainstream media is interesting because they have covered this as a Jewish story. I think part of the interest has been that this is a kosher plant. There is this really fascinating nexus of religion and ethics and animal slaughter and a rural town that is going on in the Agriprocessors story and that has played into how it has been covered.

What are some of the other highlights from your reporting on this subject that you think are noteworthy?

In South America, they use this shackle and hoist method [of slaughtering cattle]. When labor is cheap, it doesn't cost that much to use this method of a bunch of guys tackling the cow, and turning it on its back and killing it that way. This practice was so out there, so beyond what you are seeing from the Agriprocessors slaughterhouse in Nebraska. It turns out that there was sort of a quiet movement of rabbis who realized that at some point somebody is going to realize this and we can't be using this method. So I learned about this quiet discussion within the rabbinic world. I ended up reporting on it. And a PETA video came out literally a day after I reported on this practice. And that same week the chief Rabbinate in Israel, the rabbis there said, "OK, we have got to stop this."

The biggest thing that has happened is that this group of conservative rabbis which, depending on how you count, is the biggest Jewish denomination in America, immediately after the initial report, went out to Iowa and talked to the workers and the people surrounding the plant and discovered a lot of the things that I had seen when I was out there. And they created this new certification, the Heckscher Tzedek, which is intended to take into account the way a kosher food company treats its workers and deals with environmental issues.

It is really now a philosophical debate within the Jewish world...that has spilled over to the editorial pages of the New York Times and the Wall Street Journal. You hear these panel discussions everywhere -- what does it mean to be kosher?

Is this a bigger story than just one that concerns the Jewish community? Are there larger truths here?

I think that part of the reason that my reporting found fertile ground is because there is an interest in the United States in where does our food come from. What I've realized in the course of reporting on this is that Jews a few thousand years ago had foreseen this trend. Jews were to some degree the first mindful eaters, being very aware of where their food came from and how it was killed and how it was treated until it reached the table. What Jews are dealing with here is something that America at large is looking at: How do we relate to our food and what are our responsibilities when we sit down to eat and purchase food?

For those interested in more information about Agriprocessors and its impact on Postville, an early history by journalist Stephen Bloom, "Postville: A Clash of Cultures in Heartland America,â published in October 2000, describes the transformation of the town after orthodox Jews established a kosher meatpacking plant there. And for more reporting by Popper, check out his twolatest articles.