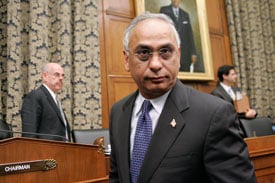 The House oversight committee today held its third hearing on the financial crisis. Earlier this month, Lehman Brothers and AIG had their turn. Up today were the credit rating agencies: in particular the two major players, Moody’s and S&P.

As we wrote late last month, those agencies played a key role in the subprime mania on Wall Street by giving the gold seal to subprime securities. A two-part investigative series by Bloomberg showed that the reason for the failure was clear: the agencies were more interested in keeping potential clients happy than in rigorously analyzing the risk of the mortgage-based securities. The rating agencies relied on fees from the banks that issued the securities, creating an incentive for the agencies to fudge the ratings.

The Bloomberg report and an earlier report from the SEC’s inspector general were full of candid admissions from insiders at the firms. Today Rep. Henry Waxman’s committee produced a number of documents providing even more detail. Perhaps the bluntest admission came from two S&P employees chatting over IM (pdf) in April of last year:

S&P Employee #2: I know right.. model def does not capture half of the risk

S&P Employee #1: we should not be rating it

S&P Employee #2: we rate every deal

S&P Employee #2: it could be structured by cows and we would rate it

S&P Employee #1: but there’s a lot of risk associated with it – I personally don’t feel comfy signing off as a committee member.