Two weeks before a sweeping new immigration policy is set to take effect, the Department of Homeland Security has issued a 25-page set of corrections to the final version of the “public charge” rule, including fixes to substantive errors that ProPublica wrote about in August.

Immigrant advocates said the extent of the corrections to the rule, which will make it harder for low-income migrants to enter the U.S., underscores their contention that the Trump administration aggressively pushed major policy changes without taking sufficient time to ensure clarity and precision.

In all, the agency fixed 65 items in the regulation, correcting 36 distinct errors, ProPublica found. Most changes are typographical but some are important modifications to the complex policy, which consumed 217 pages of three-column text in the Federal Register when the final version appeared in August. (A draft version was published in October 2018.) The final rule garnered over 266,000 public comments, the vast majority opposed to the changes.

That specific provision pertained to how the new rule applies to military families. The final rule stated that active-duty service members who are immigrant noncitizens would be allowed to use benefits without having it weigh against them as a “public charge” in the future, as would their family members. But immigrants who are the spouses or children of active-duty service members who are U.S. citizens were not included in the exception, meaning their use of benefits while their spouses were on active duty could jeopardize their future in the U.S.

Throughout the regulation and its supporting documents, there were contradictions on this issue. Now, U.S. Citizenship and Immigration Services has clarified that it correctly described the regulation elsewhere, but that it “inadvertently” left the spouses and children of U.S.-citizen service members out of the regulatory text.

The corrections released Tuesday also fix a substantive error that would have made some temporary visa holders ineligible for waivers to the public charge test.

Corrections to final regulations are common. In addition to the “public charge” corrections, the government issued corrections Tuesday to other publicly released documents from both the Commerce Department and the Treasury.

But regulatory experts said the extent of the corrections made to the public charge rule are unusual, even for a complicated policy change.

“This is more than what would seem typical,” said Bridget C.E. Dooling, a professor at George Washington University who previously worked at the Office of Information and Regulatory Affairs, the federal office that manages the regulatory process. She noted that Medicare payment rules can run to thousands of pages in the Federal Register, yet they usually garner just a few pages of corrections.

Sean Moulton, a senior policy analyst at the nonpartisan Project on Government Oversight, said the list of corrections was “surprisingly long” and raises questions of whether “they messed up and skipped some editorial or revision review before publishing.”

In a statement to ProPublica, USCIS spokesman Matthew Bourke said that the final rule “underwent several layers of review and coordination,” and that “a significant majority of corrections were simple typographical errors.”

The public charge rule, which immigration and public health experts believe has already had a chilling effect on the use of public benefits by immigrant families, even those not directly affected by the rule, has been a major Trump administration priority as it seeks to limit legal immigration to the U.S. White House senior policy adviser Stephen Miller pushed USCIS last year to finish the rule quickly, emails revealed by Politico show.

“It’s pretty rare to see just such an overwhelming volume of errors made in a final rule, and that tells you something about the integrity and assiduousness of the rule-making process,” said Doug Rand, a founder of Boundless Immigration, a company that helps immigrants obtain green cards and citizenship.

The nature of the errors reinforces that idea.

In addition to the error affecting military families, the other substantive error fixed by USCIS on Tuesday would have created a double standard for temporary (“nonimmigrant”) visa holders.

In the rule published in August, individuals who were applying to extend their current visa, and people trying to change from one temporary visa to another, would both have to demonstrate they hadn’t used benefits above a certain threshold. The regulation on extensions of existing visas said that the benefits test wouldn’t apply to people for whom the public-charge requirement had been waived. The regulation on changes between different types, however, didn’t include that phrase — meaning that some temporary migrants would be eligible for waivers and others would not.

“DHS never intended to treat extensions of stay and changes of status differently in this regard,” the corrections document says. The rule has now been corrected so that waivers will be available for both types of visa holders.

A few of the minor errors — typos — in the rule could have caused problems or confusion. At one point, because of a typo, the rule published in August prevented immigrants from getting bonds back if they’d used too many public benefits in a “364month period” — as opposed to a 36-month period. 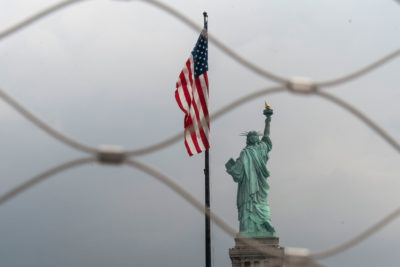 Others simply suggest carelessness. At one point, the text of the published final rule still refers to the “proposed rule” — indicating that text was copied from the draft published in 2018 and never updated. On several occasions, forms are referred to without the word “form” in front of them; on one occasion, a form is called an “I-Form 539” instead of a “Form I-539.” And many of the tables in the rule had to be renumbered, once officials realized that Table 7 had been mislabeled as “Table 2” — throwing off the numbering of subsequent tables as well.

Bourke, the USCIS spokesman, attributed the typos and need for clarifications to the length of the document and the hundreds of thousands of public comments the regulation garnered.

American states, cities, counties and nonprofit organizations quickly filed federal lawsuits challenging the final public charge rule after it was released. An Aug. 26 motion for a preliminary injunction in one of the suits, filed by the states of California, Maine, Pennsylvania and Oregon, and the District of Columbia, noted the contradictions on the military families issue, calling it an “unwarranted discrepancy.”

On Wednesday, a federal judge is set to hear arguments on the motion.

“The corrections will not affect the scheduled implementation or how USCIS will apply the final rule,” Bourke said. “The agency is on track to begin implementing the public charge inadmissibility rule later this month.”

Rand, who worked on immigration issues as a White House official in the Obama administration, noted that USCIS has yet to issue the final version of the lengthy new form for immigrants to document their financial situation and benefits history. The form will be required for applications submitted on, or after, Oct. 15.

Traditionally, the agency provides approximately two months’ notice for even minor changes to USCIS forms. In this case, however, they will have at most two weeks.

“All relevant forms will be posted on USCIS website by implementation date,” Bourke said.