The idea has natural appeal: Give money to U.S. troops, who with the benefit of daily, direct contact with Iraqis, will spend it where it can do the most good. It's called the Commander's Emergency Response Program (CERP), and for the five years of the Iraq War, itâs virtually the only thing about American strategy that has been spared criticism. 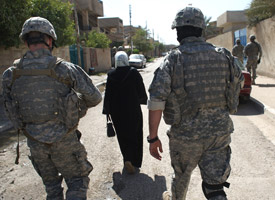 Washington Post reporters Dana Hedgpeth and Sarah Cohen took a hard look at the program, and you can see the results in a pair of stories, along with a database of more than 26,000 expenditures, in today's paper. The U.S. has so far spent some $3.5 billion on the program in Iraq.

None of the programâs failings come as a shock. Give commanders bundles of cash to distribute in a sometimes chaotic war zone, and the paperwork will be less than rigorous. About 1/6 of the projects in the database, which relied on government data, lack "key elements," the Postfound, "such as the year, location or the amount actually spent." One hundred and thirty-five million dollars in CERP payments caught the attention of the Pentagon's inspector general earlier this year. The money had gone to U.S. allies in Iraq; the documentation only indicated that the cash had been expended "for the benefit of the Iraqi people."

CERP money is supposed to be reserved for "small-scale projects." But its flexibility has also proven irresistible for commanders wanting larger projects with fewer strings attached: The Postfound that about $1 billion of the money spent so far has gone to projects with a price tag over $500,000, the ceiling for "small-scale" under the Armyâs official definition. Sen. John Warner (R-VA) complains that CERP is turning into a "bank for development."

Many of the expenditures seem indisputably in line with CERPâs purpose. For instance, the $50 million in "condolence" payments paid to the families of killed or injured Iraqis. And then there are examples like a U.S. commander's attempts to get a glass factory in Ramadi up and running -- to mixed results. ($14,250 spent on "I Love Iraq" T-shirts might be judged more harshly.)

The U.S. military has issued a manual to try to guide commanders on how best to use the funds. But the whole point of the program is for commanders to be able to react to unique circumstances. So guidance remains somewhat broad. One litmus test for whether a project should be green-lighted is whether it would "embarrass" the Pentagon "if shown on 60 Minutes."

The program remains popular with commanders and the Iraqis who benefit. But perhaps the most interesting criticisms of CERP comes from a one-time adviser to Gen. David Petraeus, David Kilcullen, who argues that the easy money fosters dependency at the expense of long-term stability:

Kilcullen, â¦ who examined CERP last year, said the payouts are like dealing heroin -- "easy development money that undercuts our efforts to improve their financial governance." He warned that the projects are a "rush" that often doesn't last.

And then there's the simple fact that soldiers sometimes simply don't know the best way to use reconstruction funds. As one Army captain puts it: "We're Army guys. We're not civil engineers. We're not economists. We can't gut-check a lot of these programs."