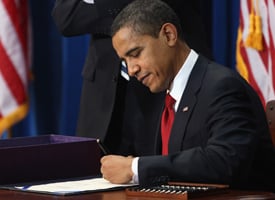 A few weeks ago, we cast a skeptical eye on the job creation estimates the Obama administration had attached to the stimulus bill. Well, the White House has just released another set of estimates -- and they're just as fishy.

The White House made the original estimates by converting money spent to jobs created by using something called "multipliers." A tax multiplier, for example, tells you what a dollar in tax cuts amounts to in terms of economic growth. A government spending multiplier does the same -- with dollars that flow out of government programs.

But the problem with multipliers is they are based on economic estimates, estimates that few economists agree on. The multiplier you choose, and reasonable people can disagree, has a huge impact on how many jobs you think will be created. The GAO estimate, which uses a range of reasonable multipliers, is the very non-specific range of 1.2 million to 3.6 million jobs.

Given the yawning gap of 2.4 million jobs in that range, it might seem silly to extrapolate using the same technique that Arkansas, for example, will see a boost of 31,000 jobs. But a release from the White House, distributed in updated form today, does just that. And it doesn't stop with states -- it even goes so far as to calculate the job impact by congressional district. Lucky you, Ohio 11th, you're getting 6,300 jobs.

How did they come by these numbers? The multipliers are multiplying. According to the release, they took the original assessment (PDF) of overall national job creation, used multipliers by forecaster du jour Mark Zandi to determine the total number of jobs by industry, and then distributed the theoretical jobs based on Census data regarding the working-age population and industrial composition by district.

For example, the prediction is 26,000 mining jobs nationwide. To determine where the jobs would go, they found the districts with the most mining and then distributed the jobs proportionally.

Other than the wide margin of error inherited from the national estimate of job creation, what is the problem with this?

For one thing, it assumes that stimulus funding for mining projects will go to the areas with mining. Is this true? Not necessarily. Our map shows stimulus funding will be anything but uniform.

We've put a call into the White House to ask them about the fishy figures. We'll let you know if and when they respond.