This story was published as an op-ed in the New York Times.

As the Obama administration and Congress try to forge a legal framework for detaining suspected terrorists, they might want to take a close look at what's happening at the federal district courthouse just a short walk down Pennsylvania Avenue from both the White House and the Capitol.

Trial judges there have quietly decided 31 of some 200 cases brought by Guantánamo inmates seeking freedom. Dossier by dossier, the jurists have answered the core questions that policy experts have been addressing in theory: When can the president place someone in preventive detention, and how solid does the evidence need to be?

President Obama, like George W. Bush before him, has claimed the power to detain not only Qaeda and Taliban members, but also those who "support" them. Last year the Supreme Court ruled (PDF) that the courts can scrutinize these detention decisions and overturn them if they are invalid. But the court didn't say exactly what a valid detention looks like, and Congress hasn't stepped in to make it clear.

Thus the federal judges in Washington have had to develop their own guidelines — functioning, in essence, as the country’s national security court.

A close examination of the decisions shows that some of the fears about sending terrorism cases to civilian courts have not been realized. The judges haven't been particularly hard on the government, holding it to a low standard of proof: If more than half the evidence tips in the government's favor, then the detainee stays put — a far lower bar than "beyond a reasonable doubt." The judges have also admitted hearsay evidence, and they've sealed courtrooms to protect government secrecy.

Yet despite these allowances, the government has not fared well. Twenty-six detainees have won their lawsuits, known as habeas petitions, while five have lost. So far, the Obama administration has filed just one appeal.

These initial judgments may not be typical, because they involved relatively low-level suspects. But they offer the first tangible indication of what members of the third branch of government believe it takes to make preventive detention legal.

While the federal trial judges are working largely without guidance, the Supreme Court did offer some clues in its decision on a 2004 challenge by Yaser Hamdi, an American accused by the Bush administration of fighting the United States in Afghanistan. The justices said the situation in which he was captured was enough like a classic battlefield that detention without charge was justified until the end of hostilities, as is typical in wartime.

But the fight against terrorism won't have a "clear terminal point," as President Obama said recently, and many of the detainees weren't captured on an obvious battlefield. The president says he can detain not only anyone who contributed to the 9/11 attacks, but also people "who were part of, or substantially supported, Taliban or Al Qaeda forces or associated forces that are engaged in hostilities against the United States." The habeas suits have opened this claim to dispute. Some judges have pushed back at President Obama's assertion of power, particularly when assessing the concept of "supporting" the enemy.

In the case of Ghaleb Nassar Al Bihani, a Yemeni being held at Guantánamo Bay, Judge Richard Leon agreed with the government that simply cooking meals for the Taliban was "more than sufficient 'support'" of the enemy to justify his detention. Yet Judge Gladys Kessler ordered another Yemeni, Alla Ali Bin Ali Ahmed, freed despite the government's claim that he'd stayed at a suspect guesthouse and "traveled ... in the company of terrorist fighters fleeing the battlefield."

Another judge, Reggie Walton, who is handling the challenges of more than a dozen men, defined "substantial support" as membership in "the 'armed forces' of an enemy organization." Judge John Bates scrapped the "substantial support" concept altogether, which he said comes from the world of criminal law. 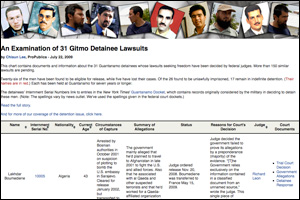 Perhaps the sharpest curb on presidential authority came from Judge Ellen Segal Huvelle, who ruled in March that even if a Taliban fighter named Yasin Muhammed Basardh had deserved detention when captured, he now deserved freedom because he had informed on other detainees and "any ties with the enemy have been severed."

The judges have been more accommodating of the government on technical matters, including the protection of national security secrets. All have routinely concealed important facts — sometimes even the very basis for deciding to keep someone locked up — despite the principle that American courts should be open.

That's what happened in the case of Moath Hamza Ahmed Al Alwi, a Yemeni whose lawyer insisted he had traveled to Afghanistan to fight in its civil war, not against the United States, and was "easy prey for locals who were eager to hand over anyone they could find in return for American rewards." Judge Leon rejected the argument, saying there was "more than ample evidence" of Mr. Alwi's affiliation with America's enemies, but that evidence isn't revealed in the unclassified version of the judge's decision released to the public.

In the case of six Algerian men arrested in Bosnia, Judge Leon ruled in favor of five because the evidence that they had planned to travel to Afghanistan to take up arms against the United States was unreliable. But the judge decided against the sixth man because of other "credible and reliable" evidence that he kept secret.

The judges have also overlooked technical imperfections in the government's evidence, admitting anonymous and other unverifiable information. One government lawyer explained that military and intelligence officers aren't accustomed to following the "finer points" of evidence rules, and the court doesn't appear to expect them to be: in no case has a judge decided against the government merely because its evidence lacked proper form, as far as the publicly available records show.

The judges were more demanding when it came to interpreting the substance of the government's evidence. In the case of Mr. Ahmed, Judge Kessler agreed to consider hearsay "because of the exigencies of the circumstances." But she eventually ruled that he should be released because the accuracy of the evidence was "hotly contested for a host of different reasons ranging from the fact that it contains second- and third-hand hearsay to allegations that it was obtained by torture to the fact that no statement purports to be a verbatim account of what was said."

The trial judges have also rejected much of the intelligence community's "mosaic theory," which calls for interpreting minor facts to suggest a greater threat. Judge Kessler, for example, refused to infer that Mr. Ahmed was an enemy fighter simply based on a "web of statements" that he had associated with enemy fighters.

She acknowledged that the mosaic approach "is a common and well-established mode of analysis in the intelligence community," but that the legal system required more specific evidence. Likewise, in January Judge Leon ordered the release of Mohammed El Gharani, a citizen of Chad, after dismissing the main evidence against him: contradictory statements from two detainees whose credibility the government itself had "directly called into question."

In the absence of guidelines from Congress and the president for evaluating preventive detention cases, these judges have succeeded in coming up with their own, individual approaches. Yet whenever ground rules seem ad hoc, people worry about fairness — is the man in the next courtroom getting a better shake? One step toward assuring the public that justice will be uniform is to establish clear standards.

At the top of the list, the government could clearly state what makes a person subject to indefinite detention by the president. Is "supporting" the enemy enough? If so, what exactly is "support?" And, once a judge has concluded that someone has been unjustifiably detained, what is the president required to do?

Seventeen of the 26 detainees who've been cleared for release by judges remain in custody. President Obama has given mixed signals on how he views the issue. He has resisted a judge's order to release immediately 13 Chinese Uighurs, saying that the courts can't override the president's discretion to decide when detainees will be freed. Yet that position contrasts sharply with his message in a recent televised speech, when he said he accepted judges' rulings that certain prisoners should be released. "The courts have spoken," Mr. Obama said. "We must abide by these rulings."

But as these cases show, neither the guidelines for deciding the cases nor the consequences of the decisions are quite so clear.

Note: This article is not subject to our usual Creative Commons license until Aug. 22, 2009