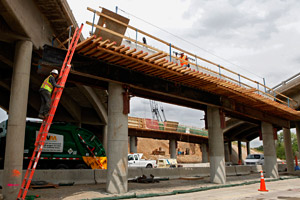 House Democrats this week credited stimulus road and transit projects with creating or sustaining nearly 50,000 jobs. But a close look shows the estimate suffers from what's become a common malaise in the stimulus world: fuzzy math.

Interviews and spot checks with states that provided job counts to the committee uncovered some glitches, in particular a reliance on raw head counts — which tend to inflate the numbers by giving full- and part-time jobs the same weight — and by counting the same workers two, three or four times.

One way around the problem is to use what's known as full-time equivalents — the hours worked on stimulus projects divided by the hours in a typical work week (43 for construction jobs). By that measure, the stimulus provided the equivalent of a mere 9,920 full-time jobs since March, when the first projects broke ground. But that's probably shortchanging things — after all, even part-time work is a job.

The truth is probably somewhere in the middle. But whatever the figure, it's certainly well short of the 1.6 million workers who've been added to the unemployment rolls since March.

As we've reportedbefore, figuring out how many jobs the stimulus has created or saved is one of the key measures of its success — and a tricky business.

The committee touted its estimate in a news release in advance of a hearing today on the progress of stimulus projects. The chairman, James Oberstar, D-Minn., said the stimulus has "already begun to play a key role in putting people back to work." The release credited stimulus transportation projects with 49,377 jobs.

Jim Berard, spokesman for the House panel, said the estimate simply reflects what states reported. "We're not trying to mislead anybody," Berard said.

The committee reached its total by adding up the number of people who've worked on stimulus-funded highway or transit projects. Last week, we reported on the problems with simple head counts.

Besides failing to distinguish between part-time and full-time jobs, head counts are subject to another error: Construction workers often rotate among projects, which can lead to double- or triple-counting when project totals are added together. State workers who oversee multiple projects also can be counted more than once.

Tom Gavin, a spokesman for the White House Office of Management and Budget, said "double, triple and quadruple counting is clearly going to be an issue" when using head counts. OMB will put out its own official stimulus job estimates this fall, he said. Unlike the House panel, it will audit the state head counts while also reporting FTEs.

Using FTEs as a benchmark has its own shortcomings. Gavin said FTEs are more a gauge of progress than of actual jobs. If you add up all the hours worked on stimulus projects so far and divide them by the total hours a full-time person would have worked since March, the number you get is the above-mentioned 9,920 FTEs — but that assumes those workers were employed continuously over those months.

In reality, the stimulus started small and built up steam. From May to June, the number of hours worked on stimulus jobs since its inception nearly doubled. FTEs that month totaled 17,000, according to the committee's data. The panel's head count — its reckoning of people in jobs, whether full- or part-time — for June is 28,000.

It can all seem bewildering. Gavin said the job estimates should be seen as a "gauge of progress." He added, "We're trying to put people to work right now and, at the same time, build the foundations of the economy that for too long have been ignored."

Meantime, states are taking some flak for their job estimates.

The 3,000 stimulus jobs that Democratic officials in Oregon proudly announced were found by the Associated Press to last an average of 35 hours, not quite a standard work week. A transportation commissioner employed by Utah's Department of Transportation publicly questioned the accuracy of the job numbers reported by his own agency. A few DOT officials in other states confirmed to ProPublica that their head counts probably are inflated.

"There may be some people who are counted twice," said Bill Cass, the director of project development for the New Hampshire Department of Transportation. "I don't have a real good way, short of going through every project, of differentiating how many may have worked on total projects."

For example, New Hampshire's report for June triple-counted the number of employees that contractor Pike Industries put on stimulus projects — inflating the figure from 225, what Pike says it has employed, to 620.

Some state officials said coming up with job estimates has become a burden at a time when they're pushing to get projects up and running.

Michael Covington, a policy analyst with South Carolina's Department of Transportation, said the agency has provided numbers to Congress, the feds and the state's comptroller general. "You wouldn't believe the amount of reporting required," Covington said. "It's hard to come up with tangible numbers to begin with."