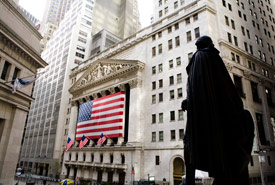 By our count, 35 banks have now signed up for the government’s capital injection plan – that’s an investment of $163.4 billion in federal funds.

But we may soon have many more to count. Treasury Department officials tell the Wall Street Journal that thousands of banks could apply.

There seem to be two main motivations for banks to join the fun. First, the government’s deal—a mere 5% interest at a time when credit is tight and with few strings attached—is just too sweet to pass up. Second, and this seems like a more powerful motivator, banks are afraid that if they don’t sign up, they’ll be seen as weak.

Ever since the Treasury Department launched its plan to invest directly in the nation’s banks, officials have refused to say exactly how they’d be picking which banks could participate, only saying that the program was for "healthy" banks. Judging from the market reaction and the roster of participants so far, it seems that characterization was accurate. As a result, banks that don’t jump on board risk being tarred as unhealthy.

The New York Times reports on the secret internal criteria being used by regulators to gauge a bank’s health. The banks get a rating from 1 to 5. Those getting a 1 or 2—the healthiest banks—"are essentially guaranteed to qualify for the investments." For those in the middle tier, it’s a judgment call. The bottom rung isn’t given a chance.

Nevertheless, a few banks have already announced that they will not be applying. The San Antonio-based bank Cullen/Frost, for example, announced last week that it has "sufficient capital to grow our business and take advantage of acquisition opportunities." Others have taken an opposite tack. The head of Washington Federal, for instance, tells the Journal that the bank is participating because "we wanted it well-known in the market that we're on the list of survivors."