Watch the "Follow the Money" report that aired on CBS Evening News With Katie Couric.

The village of Ouzinkie is one of the remotest outposts in the United States -- home to a mere 165 people on an island off another island off the coast of Alaska. There are no stores, no gas stations and no stoplights.

Yet the village will soon be home to a new $15 million airport paid for by taxpayers under the federal stimulus package.

Officials say the airport is a critical link for the Alutiiq natives and the descendants of Russian otter hunters who call the village home. Residents depend on a $200 round-trip flight just to go to the grocery store. The only alternative: a 40-minute skiff ride across the sometimes choppy Ouzinkie Narrows to Kodiak.

The Federal Aviation Administration has now allocated all of its $1.1 billion in stimulus money for airport improvements. But the complex set of rules laid out in the recovery act has led to some counterintuitive results.

The biggest winners aren't the busiest airports. And more than $100 million is going to airports that have fewer than one flight an hour -- airports that cater to recreational fliers, corporate jets or remote communities.

The Alaskan villages of Ouzinkie, Akiachak and Fort Yukon are each getting the maximum $15 million stimulus grant. Other winners include an airport owned by a private flying club, one used mostly by Purdue University and a landing strip on an American Indian reservation that has roughly one flight every two days.

By contrast, Hartsfield-Jackson Atlanta International Airport -- the busiest in the world -- hasn't received any stimulus money from the FAA. Neither have hubs in Newark and Las Vegas.

The FAA says politics aren't to blame for the inconsistency. The stimulus was designed to supplement infrastructure funding, not supplant it. Projects weren't eligible if they had already received money from federal, state or local governments, or from private sources such as landing fees, and that ruled out many bigger, busier airports.

When the stimulus plan was announced, for example, McCarran International in Las Vegas was already in the middle of a $3.5 billion capital improvement program.

"In other words, there was no supply of 'shovel-ready' work that was not already funded or under way at McCarran," said Chris Jones, spokesman for the Clark County Aviation Department, which operates the airport. 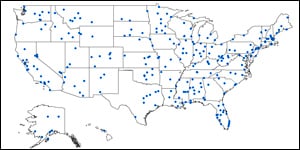 To qualify for stimulus money, airports were required to have a project ready to start in 30 days. Awards were limited to $15 million per project, and no airport board could receive more than $20 million.

That means the Port Authority of New York and New Jersey -- which operates Newark Liberty, LaGuardia and John F. Kennedy airports -- couldn't get any more money than the airport authority in Mott, N.D., pop. 692.

The government also waived the usual requirement that airports put up some of their own money, making the stimulus grants attractive to smaller airfields.

"We tried to target the ones that have the most urgent needs," said FAA spokeswoman Laura Brown. "It was designed to fund projects that otherwise might not have been funded. ... For some airports, this is probably a unique opportunity."

So it is at the Standing Rock Sioux Reservation in North and South Dakota, where unemployment is 45 percent in the summer and tribal funds are limited. "You need to devote as much of the money as you can to taking care of the social needs," said the tribal chairman, Ron His Horse Is Thunder.

Under the stimulus package, the Standing Rock Airport in Fort Yates, N.D., about 60 miles south of Bismarck, will receive $1 million to repave the runway, install lights and build a fence.

The airport has about 200 takeoffs and landings a year, roughly the traffic Atlanta has every 90 minutes. But the upgrades might help the reservation attract new wind energy business or defense contracts, His Horse Is Thunder said.

Most important, it will improve the chances of getting air ambulance service for emergencies, he said. The Standing Rock reservation is roughly the size of Connecticut.

The stimulus package lands in the middle of a running political battle about airport finances. Airlines have complained for years that hobbyists and business fliers aren't paying their fair share, causing airline passengers to pay more for tickets.

Unlike the usual grants for airport improvements, stimulus money doesn't come from ticket fees but from an increase in the national debt.

Funding for little-used airports also has been a focus for Republican critics of the stimulus. They’ve singled out a regional airport in Johnstown, Pa., that bears the name of Democratic Rep. John Murtha, whose generous earmarking is under FBI scrutiny.

The Washington Post reported in April that the airport has received $200 million in federal funds in the past decade, including $800,000 in stimulus money. The National Republican Congressional Committee dubbed it the "Airport for No One."

But larger chunks of stimulus money are going to airports that are closer to major cities and get far less use than Murtha's.

The grants were open to any publicly owned airport regardless of size. Private groups could compete so long as their airports served more than 2,500 passengers a year or were designated as "reliever" airports to reduce air traffic congestion. 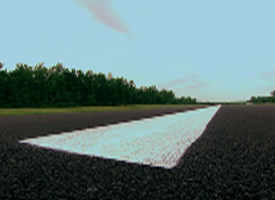 That's what opened the door for the Williamson Flying Club.

The group of roughly 200 hobbyists who fly Pipers and Cessnas owns and operates the Williamson-Sodus Airport near Lake Ontario in upstate New York. The private club recently resurfaced its runway with the help of a $555,000 stimulus grant.

According to club bylaws, prospective members must be approved by a two-thirds vote and pay a $345 membership fee plus $30 a month in dues and insurance. But President Joe Ebert said the rules are a formality and not intended to be exclusive.

"I don't think we've turned away but a half a dozen people," he said. "We can't tell people they can't use our airport because we've accepted public funds."

Williamson-Sodus is also a "reliever" runway for Greater Rochester International Airport, about 35 miles west, and is used by the Coast Guard to store supplies.

But according to the FAA, 90 percent of the flights are by local recreational or business aircraft. During one recent week, 10 of the 22 takeoffs and landings recorded on the air traffic Web site FlightAware.com were by the flying club or one of its officers.

Then there is the Purdue University Airport in West Lafayette, Ind.

The two-runway airfield was closed to commercial flights more than five years ago and is mainly used by students in the aviation technology program, the football and basketball teams and senior administrators. Most students use Indianapolis International Airport, an hour's drive south, said Betty Stansbury, the Purdue airport drector.

Under the stimulus package, Purdue's airport will get $1.45 million to raise its fence from 8 feet to 12 feet and add a barrier to prevent animals from burrowing underneath.

The FAA recommended the project several years ago to meet new standards, Stansbury said. "I said, 'We'd be happy to do it if you provide funding for it because we don't have the resources to be able to do that,'" she said.

The taller fence and barriers will prevent wildlife from getting in the way of planes, Stansbury said. "A deer can jump an 8-foot fence."

But since 1990, 13 of the airport's 14 reported animal strikes were birds. The other one involved a burrowing animal -- when the propeller of a Piper Cherokee hit a skunk.

An Air Lifeline for the Economy

Aside from California, Alaska has received the most airport money. Many communities there are so isolated they lack construction equipment, increasing costs.

To repair the gravel runway in Allakaket, the contractor will have to ferry equipment in on barges that are specially designed for the shallow bottom and hairpin curves of the Koyukuk River, said the project manager, Cindie Little.

"Doing construction work in rural Alaska is not for the faint of heart," Little said.

Many Alaskan villages wouldn't survive without airports, said Roger Wetherell, spokesman for the state Department of Transportation and Public Facilities. With 82 percent of communities unserved by roads, Alaskans rely on airports for food, mail and medical transport.

In Ouzinkie, there is little alternative, said Tom Quick, the city's utility manager and vice mayor. Residents pay $50 to fly to the supermarkets on Kodiak Island. On the way back, the boxes of groceries that have to go in cargo raise the price to $150, he said.

The existing gravel runway is too short, subject to 60-mph crosswinds and built near a landfill frequented by seagulls, Quick said. A new airport might attract a fish-drying facility or a tourist lodge, he said, leading to a rare commodity -- stable jobs.

And that could keep Ouzinkie's youths from fleeing, he said.

"How many people you've got," Quick said, "doesn't deny the fact that a community needs essential services."