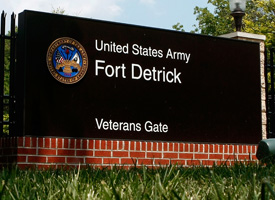 The U.S. Army has suspended research with deadly agents and toxins at the military's top germ warfare lab, which came under intense scrutiny after the FBI identified it as the source of the anthrax used in the 2001 "Amerithrax" attacks that killed five, injured 17 and kept the nation on knife-edge for weeks.

The suspension, announced internally last week at the U.S. Army Medical Research Institute of Infectious Diseases (USAMRIID), was attributed to concerns about whether the facility had an accurate inventory of all the deadly "select agents" in its freezers and refrigerators. Select agents are the most dangerous and tightly regulated biological substances used in research, including anthrax, Yersinia pestis (plague) and the Ebola and Marburg viruses.

The FBI last year contended that Bruce Ivins, who worked on anthrax vaccines at USAMRIID's labs in Ft. Detrick, Md., engineered the 2001 attacks. Ivins, who had become emotionally troubled, committed suicide before the government could try to prove its theory in court.

As we reported in a three-part series in December, many WMD experts are worried that the $20 billion the federal government has spent on bio-defense research in the past seven years might actually have put the nation at even greater risk of a bioterrorism attack because the spending has spawned a proliferation of labs and scientists working with "select agents."

Last week's suspension of much of the germ-warfare research at the military's top bio-defense laboratory is just the latest in safety problems at bio-defense facilities around the country attributed to lax security.

John P. Skvorak, the commanding officer at USAMRIID, notified researchers in an internal memo that the lab was unable to meet Defense Department requirements that all biological select agents and toxins (BSAT) used in the facility be tracked and logged in a database.

Over the past four decades, as researchers have come and gone and programs have been started and completed, select agents no longer in use have accumulated in corners of the facility, according to one official. Much of it has become forgotten, she added.

"I believe that the probability that there are additional vials of BSAT not captured in our database is high," Skvorak wrote in the memo, which was first reported Monday by Science magazine.

He added: "We must take immediate steps to meet the Army and (Defense Department) definition of 100% accountability. Therefore, we will stand down until we have inventoried all freezers and refrigerators."

USAMRIID spokesperson Caree Vander Linden confirmed to ProPublica that research has been suspended, adding that the inventory would be "very labor intensive" and could last weeks or months.

As we noted in our December investigation, there has long been concern about the growing number of public and private labs in the U.S. using select agents. This is especially true after Ivins alleged ability to put a spoonful of high-quality anthrax in envelopes and send them around the country without risk that the missing anthrax would show up on an electronic inventory at Fort Detrick.

Residents living near the Fort Detrick facility have expressed mounting concern about construction there of a bio-defense campus for the entire federal government.

"People in Frederick have been raising concerns about inventory control, personnel issues and accidents for years," said Beth Willis, a community activist in nearby Frederick, Md. "A stand-down of operations is appropriate, but it needs to continue until all of these fundamental safety issues are addressed," she added.