The chiefs of the federal regulatory agencies -- Henry Paulson, Chris Cox and Ben Bernanke -- have each called for better regulation of derivatives, the financial instruments at the center of the current crisis. Yet a look at their Senate confirmation hearings suggests they once held quite different views. 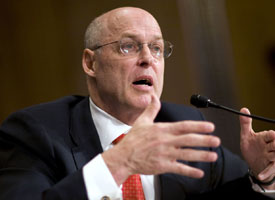 In June, Treasury Secretary Paulson told the Washington Post that in one of his first meetings with President Bush, he warned that the growing use of derivatives posed a fundamental risk to the market. If that is the case, he didn’t say so publicly. In response to a written question by Sen. Mike Crapo (R-ID) submitted at the Treasury Secretary’s Senate confirmation hearing in June 2006, Paulson said he was “wary” of proposals to strengthen regulation of derivatives because of their importance in managing risk.

CRAPO: I’m very concerned about the potential efforts in this Congress to change the manner in which we regulate derivatives or to impact the manner in which derivatives operate in the economy. As you know, the President’s Working Group on Financial Markets has explained why proposals that we have faced in the last couple of years for additional regulation of energy derivatives were not warranted, and has urged Congress to be aware of the potential for unintended consequences.

b) Do you agree with the view of Alan Greenspan and others that derivatives have helped create a far more flexible, efficient and resilient financial system?

PAULSON: I believe these proposals could have significant unintended consequences for the risk-management functions that the markets – whether over-the –counter or exchange-based – perform in our economy. It is my view that absent a clearly demonstrated need, we should be wary of major changes to the manner in which we regulate our derivatives markets.

The importance of derivatives markets in the U.S. economy should not be taken lightly, as businesses, financial institutions, and investors throughout the economy rely on these markets to manage their risks and to protect themselves from market volatility. These markets have contributed significantly to our economy’s ability to withstand and respond to various market stresses and imbalances.

Although I have not studied this issue in great detail, it has been my experience that increasing reporting requirements does not affect market fundamentals; rather they are influenced by supply and demand factors. 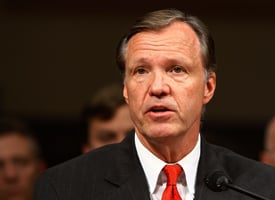 Securities and Exchange Commission Chairman Cox now leads the call for increased regulation of derivatives. In testimony before the Senate Banking Committee on September 23, he singled out credit derivatives in particular, pointing out that the market in credit default swaps is “regulated by absolutely no one” making it “ripe for fraud and manipulation.”

Cox has long known about the pitfalls of poorly understood hedging instruments; as a Congressman, he represented Orange County, California, when it declared bankruptcy in 1994 after its investments in derivatives went badly awry. But at the time, he did not join calls to regulate them: "I'm concerned that now anything called a derivative will be considered inherent evil in Congress," Cox said, according to the Orange County Register. "It is sort of like a fire hose: In the wrong hands, it is dangerous."

Did his opinion evolve by the time he was confirmed as SEC Chairman? You won’t find any clues by looking at his Senate confirmation hearing of July 2005. That is because no senator asked him a question about the topic. 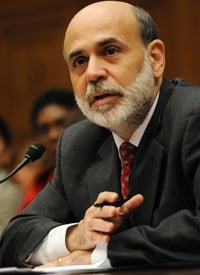 Federal Reserve Chairman Bernanke has also called for fundamental changes in the processing, management and regulation of derivatives that are traded outside of exchanges, including credit default swaps. But the economist’s concern for them is newly found. When former Sen. Paul Sarbanes asked Bernanke about derivatives at his November 2005 Senate confirmation hearing, Bernanke said he felt “sanguine” about these instruments, noting the sophistication of those who dealt with them. Sarbanes responded that this attitude toward derivatives and the hedge funds dealing in them could “come back to haunt you.”

SARBANES: Warren Buffett has warned us that derivatives are time bombs, both for the parties that deal in them and the economic system. The Financial Times has said so far, there has been no explosion, but the risks of this fast growing market remain real. How do you respond to these concerns?

BERNANKE. I am more sanguine about derivatives than the position you have just suggested. I think, generally speaking, they are very valuable. They provide methods by which risks can be shared, sliced, and diced, and given to those most willing to bear them. They add, I believe, to the flexibility of the financial system in many different ways. With respect to their safety, derivatives, for the most part, are traded among very sophisticated financial institutions and individuals who have considerable incentive to understand them and to use them properly. The Federal Reserve’s responsibility is to make sure that the institutions it regulates have good systems and good procedures for ensuring that their derivatives portfolios are well managed and do not create excessive risk in their institutions.

SARBANES. In a recent article in The New York Times, they stated, ‘‘Seven years ago, Wall Street’s top bankers were caught off guard by the near collapse of the Long Term Capital hedge fund. Since then, the number and influence of hedge funds have ballooned. The hedge fund explosion has prompted concerns that if a big bet goes wrong, regulators and banks will again be caught up in a collapse.’’ My recollection is that the Federal Reserve Bank of New York was convening all night, all weekend meetings at the time of Long Term Capital Management, putting enormous pressure on financial institutions to pick up on it in order to prevent the very collapse that is mentioned here. How do you respond to this concern? Equally sanguine?

BERNANKE. I think it is important not to be complacent.

BERNANKE. Not to be complacent. It is important for the Federal Reserve to be aware of what is going on in the market, particularly working through the banks, which are the counterparties of a lot of hedge funds, to understand their strategies and their positions. Nevertheless, broadly speaking, my understanding is that the hedge fund industry has become more sophisticated, more diverse, less leveraged, and more flexible in the years since LTCM. So again, while it is very important to understand that industry, and particularly to make sure that the banks, are dealing in appropriate ways with hedge funds, my sense on that is that they are a positive force in the American financial system.

SARBANES. Do you think these issues contain a sufficient danger in them that it would warrant the Fed undertaking a special examination of these questions if you were to become the Chairman? Because if this went bad on your watch, I mean, there could be tremendous consequences, obviously.

BERNANKE. I think it is useful to have informal contacts to try to understand what is going on in the market, and the Federal Reserve has various mechanisms for learning about this market; in particular, working through the various counterparties that deal with hedge funds.

SARBANES: Well, I commend this area to you as one that should have some focus of your attention. Otherwise, it may well come back to haunt you.