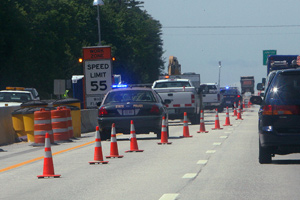 The Obama administration has put great emphasis on the number of jobs that will be created or saved as a result of the stimulus package — and so have his critics. ProPublica has reported the difficulty of created targets for stimulus jobs. However, to judge by New Hampshire's attempts to measure the number of jobs paid for by the stimulus, getting an accurate gauge of those jobs, even after the fact, is far from easy.

This isn't easy even in the best of times. In the construction industry specialized crews rotate from site to site, and few work on-site full-time for the duration of a project.

The New Hampshire Department of Transportation, or NHDOT, each month releases an employment report for the stimulus money it receives. The report provides a list of projects under way, as well as both the number of employees and total number of hours worked on each project. According to the June report (XLS), 915 people worked on road and bridge construction projects, and worked a total of 28,103 hours.

At this point, however, the numbers start to get tricky. The U.S. Department of Transportation calculates the number of employees working on its projects using a formula: It divides the total number of hours worked by 173 (the number of typical work hours in June), which produces something known as the "full-time equivalent" (FTE) of one job. The FTE is important, because it will be used this fall by the Office of Management and Budget (PDF) to count officially the number of jobs funded by the stimulus package.

When the NHDOT divided the total number of hours worked in June on stimulus projects (28,103) by the number of work hours in the month (173), the result was the equivalent of 162.5 full-time stimulus jobs — less than 20 percent of the 915 employees the NHDOT reported to be working on stimulus projects during the same month. Is the larger number wrong? It's hard to know for certain.

First, contract administrators employed by the state may oversee more than one stimulus project, meaning that they can be double or triple counted in stimulus employee counts.

For example, Bill Cass, NHDOT's director of development, explained that one administrator is overseeing four projects, and has staff supporting him. Both the administrator and his staff would have been counted four times each in the report's employment numbers.

Second, many construction workers rotate from site to site, perhaps working part-time on a stimulus project or working on several at a time. As a result, head counts — another possible way of tracking the number of jobs created — can also lead to inflated employee counts.

A case in point is a New Hampshire contractor called Pike Industries. Of the 915 employees listed in NHDOT's June report, 620 are identified as Pike employees. But Pike president Christian Zimmerman said the company employs only 450 people in New Hampshire. However, because Pike needs to report the number of employees who work on each ARRA site every month, the company employee count — like NHDOT’s count itself — can include the same worker multiple times. In fact, Zimmerman estimates that only 225 of his employees are working on a stimulus project at any given time — one third the number that appears in the NHDOT report.

The challenge of counting stimulus-funded construction jobs isn't limited to New Hampshire. On Wednesday, Kent Millington, a transportation commissioner for the Utah Department of Transportation, questioned the accuracy of the job numbers reported by his department.

Millington told the Salt Lake Tribune's Brandon Loomis that the Utah DOT's estimate of six to seven thousand jobs saved or created by stimulus funding — an estimate produced by a federal formula — was likely inflated. According to the Tribune, Millington said some of the construction workers on stimulus projects would be counted twice because they would be employed on one contract and then another.

Millington told the Tribune that the estimate was as high as it was "because the stimulus money was supposed to create all these jobs."

Adan Carrillo, a spokesman for the Utah Department of Transportation, told ProPublica that Millington had a "misunderstanding" about the way the numbers were reported. However, when pressed on whether the department's numbers could double-count some workers, Carrillo declined to rule it out. Millington's office did not respond to a request for comment.

You can help us report on the stimulus' impact in your state by participating in our Stimulus Spot Check, our latest public reporting initiative.