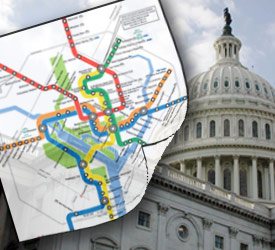 Transit officials embraced the provision, but some lawmakers argue the plan rewards a tax dodge. "This provision aimed at protecting transit agencies really just helps the banks that entered into these sham transactions in their attempts to avoid taxes," Sen. Max Baucus (D-MT), chairman of the Senate Finance Committee, said in a statement.

Last month, ProPublica detailed these shelter deals, many of which defaulted when insurance giant AIG collapsed this fall. Because AIG guaranteed the deals, more than 30 public transit agencies were on the hook for up to $3 billion in termination fees to the banks.

The proposed provision allows the government to replace AIG as the guarantor and prevents banks from collecting the fees. The auto bailout passed the House Wednesday and faces an uncertain future in the Senate.

Lawmakers were reportedly working on a different solution to the transit problem last month: slap banks with a tax, up to 100 percent, on money they collect over what the transit authorities already promised to pay.

Instead, the government's guarantee of the deals is "as solid as you can get," said Mantill Williams, a spokesman for the American Public Transportation Association, which lobbied Congress to intervene on behalf of cash-strapped transit agencies. "It does address our basic needs."

But the provision comes after years of congressional and IRS efforts to end the shelter deals, which have cost the government billions of dollars in unpaid taxes. In 2004 the IRS banned the deals and now is offering a kind of amnesty for firms that terminate their shelters by the end of the year.

As part of the arrangements, banks bought transit equipment from cities and then leased them back to the transit agencies to use at a discount. The deals, known as LILO (lease-in/lease-out) and SILO (sale-in/lease-out), gave banks sizeable tax breaks and the agencies much-needed cash up front.

Under the new plan, if transit authorities default on the leases, the government will step in to make the payments. But "the chance of defaulting is highly unlikely," said Candace Smith, a spokeswoman for Washington D.C.'s Metro transit authority. "In reality, it's not going to cost the government anything."

But Baucus and his leading Republican colleague on the Finance Committee, Sen. Charles Grassley of Iowa, aren't convinced.

Baucus demanded that "this provision must be stripped from the auto bill." Grassley said in a statement that the proposals "insult the taxpayer by propping up tax evasion."

Grassley also voiced his opposition to "the tax shelter bailout" in a letter sent Tuesday to congressional leaders, including Sen. Chris Dodd (D-Conn.), who chairs the Senate Banking Committee and crafted the provision, according to congressional sources. When we asked Dodd's office about his plan, we were told to consult the bill (PDF) itself.