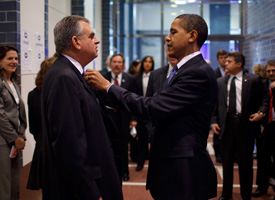 In response to recent news reports -- such as the Wall Street Journal's "Some Hard-Hit States Get Less Stimulus" -- Transportation Secretary Ray LaHood yesterday requested that states redirect stimulus funds to the most economically depressed areas in the country. States have already obligated almost the majority of their funds to specific projects, so just how will they shift focus? LaHood asked them to use funds they've saved because project bids are coming in below estimate. But they were required to obligate 50 percent of their state-controlled funds by the end of last month. So states may have already repurposed the "extra" funds. The remaining 50 percent of transportation funds must be obligated by March 1, 2010. We'll keep watch to see if a higher percentage of the remaining money is spent in economically-troubled areas.

Most economists queried in the Wall Street Journal's latest survey are opposed to a second stimulus. The Journal's Phil Izzo and Kelsey Hubbard discuss the survey's results in this video. Warren Buffett playfully disagrees. Warren Buffett, the billionaire behind Berkshire Hathaway, said on ABC's "Good Morning America" that the first stimulus was the equivalent of "half a tablet of Viagra and then having also a bunch of candy mixed in."

The Republicans have upped the ante in the war over the stimulus by dusting off an old talking point -- the salt marsh harvest mouse. During the congressional debate the GOP portrayed the critter as a cause célèbre for House Speaker Nancy Pelosi. But the mouse was nowhere in the bill and never championed during the debate. Instead, it was on a list of several animals native to Bay Area wetlands being restored with stimulus money. Politifact has more.

It’s always the little things ... In June Sen. Judd Gregg, R-N.H., filed legislation to “prohibit the use of stimulus funds for signs that advertise taxpayer spending,” according to Foster’s Daily Democrat, in Dover, N.H. Since then, the American Recovery and Reinvestment Act signs planted near construction sites have become a symbol of which critics say is the waste to a $787 billion spending package. The federal government recommends—but doesn't mandate—that states post these signs. How much are we paying for them? Previously I cited a back-of-the-envelope tally by the Atlantic‘s Christina Davidson -- she calculated an estimate of $6 million assuming that signs cost $300 a piece. ABC News dug deeper, finding that "the signs cost $500 apiece in Maryland and New Hampshire, $1,700 in Georgia, $2,000 in Pennsylvania and New York, and $3,000 per project in New Jersey." So, how much are we paying? ABC News reports, "New York alone is spending about $1 million on signs." You can read more at ABC News. Of course, one possible rejoinder to the sign critics: What exactly is wrong with spending money on signs if that ultimately employs people, too?

American Indian and Alaskan communities have been awarded $90 million in stimulus funds for tribal water projects, the AP reports.

Finally, this morning U.S. Rep. John L. Mica, R-Fla., a ranking member of the Committee on Transportation and Infrastructure, is holding a press conference to -- as his office puts it -- "talk about the failure of the stimulus to create jobs and get transportation dollars spent out in the states."