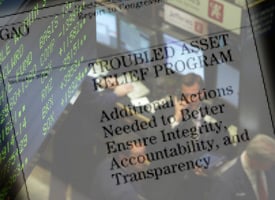 The first big report from the Government Accountability Office on the $700 billion bailout is a pretty mild affair. Given that TARP is just 60 days old, the watchdog office says it’s too soon to assess the impact of having pumped billions into the country’s banks. And since the Treasury Department is still working at getting its special bailout section, the Office of Financial Stability, off the ground (it had about 48 full-time employees as of late last month and Treasury hopes to have as many as 200), the GAO report is mostly full of recommendations on how Treasury can streamline and improve the entire process.

The Treasury Department accepted eight of the GAO’s nine recommendations for how to improve its bailing. But the one it rejected is a biggie: the GAO observes that Treasury has no way to assess how each financial institution is spending the government’s investment. It should, says the GAO. But Treasury disagrees.

The question of whether the banks would hoard the invested capital or use it to buy weaker banks instead of lending it out has been a concern since Treasury Secretary Hank Paulson first announced the program.

It would be possible to keep tabs on the banks, says the GAO, through government regulators. They have access to private financial info, and in the case of the largest banks, regulators work on site. Treasury could use that access to determine what the banks are doing with the bailout money.

But in a letter to the GAO, Treasury bailout czar Neel Kashkari said Treasury has a “different perspective.” The department “welcomes further discussion on general metrics for evaluating the overall success” of the program, but didn’t see the need to track how every institution used the money. The Federal Reserve also disagreed, reports the GAO, “because data from any single institution would not indicate that the program’s goals had been achieved.”

In response, the GAO writes that it doesn’t have to be either/or. Metrics for overall success (whether the credit markets improve, foreclosures abate, etc.) are important, but that won’t “provide the necessary transparency and accountability needed.” Only getting an idea of how each bank used the money could do that. Moreover, the information could “feed into an overall assessment of the effect of TARP” and be used to help determine the bailout’s overall effect – something, the GAO reports, is tremendously hard to do.

So far, however, the Treasury doesn’t seem to find the GAO persuasive.