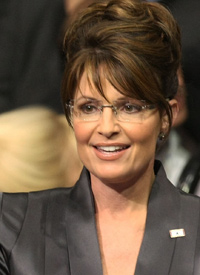 Yesterday, we detailed how Gov. Sarah Palin's lawyers have been trying to slow-roll the Alaska legislature's probe of "Troopergate." Well, the effort appears to be in high gear.

Palin has of course been accused of firing Alaska's top cop for refusing to do the governor's personal bidding and fire a trooper who was involved in a nasty divorce with Palin's sister. (Here's our backgrounder on the scandal.)

As we wrote yesterday, a Palin aide stood up investigators and didn't show up to give scheduled testimony. A lawyer for the aide, who had been recorded on a call pressing for the trooper to be fired, explained that his client didn't have to show up since the "governor's office was contesting the jurisdiction of the Legislature to handle this matter."

Today we learn via the Associated Press that while witnesses are apparently going AWOL from the legislature's probe at the governor's urging, they are at least being questioned...by Palin's own private lawyer.

According to the AP, Palin lawyer "Thomas Van Flein has worked aggressively to undermine an Alaskan legislative inquiry and has started questioning potentially damaging witnesses against the governor."

The AP says Palin's lawyer has interviewed two witnesses. One is a manager in the state's workers' compensation division. (There are allegations Palin's office peeked into the trooper’s worker comp files.)

The other witness who has submitted to questions by Palin's lawyer is a gubernatorial aide named Frank Bailey. That would be the same aide who stiff-armed investigators Wednesday.

According to the AP, interviewing witnesses before the probe gives a serious leg up to the governor because "it means that she already knows at the outset the detailed accounts of potential witnesses against her. The procedure also locks important witnesses into the accounts they give."

UPDATE: The legislators overseeing the probe appear to be making some counter-moves. They are moving toward issuing subpoenas (though not to Palin) and are apparently now looking to finish the investigation by early October, three weeks earlier than first planned.