In August, at a campaign rally in Manchester, New Hampshire, a tall man with a Viking beard and an elegant gray suit walked out on a stage, carrying a stack of red Make America Great Again hats, tossing them to an adoring crowd, shouting “Four more years!”

The man is Trump’s campaign manager, Brad Parscale, who vaulted from a mid-level web designer to digital strategist for the 2016 Trump campaign and now manages the 2020 incarnation, Donald J. Trump for President Inc., which he claims will be America’s first billion-dollar campaign. And as he’s been doing this, Parscale has figured out ways to enrich himself and his firms, at various times collecting a salary from the Trump campaign, payments from the Republican National Committee and money from a super PAC, America First Action.

Like Trump, Parscale is a man who’s reinvented himself, from working for a family company that declared bankruptcy to being a middling businessman, to becoming a high-profile avatar for Donald Trump.

ProPublica’s Peter Elkind joined “Trump, Inc.” to talk about his in-depth profile of Parscale in ProPublica and the political juggernaut Parscale is assembling to re-elect the President.

Here’s what Elkind says about Parscale and the stories he tells about himself: “He changes dates. He rearranges facts. He omits conspicuous events. He basically rewrites his own life story to become a more romantic tale, to fit into the image that he’s trying to convey. He is a promoter, he’s a hustler, he’s a marketer.” In short, Brad Parscale is a lot like his boss.

To find out more, listen to the episode. 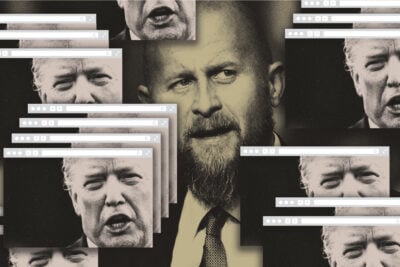