In a sharp break from the caution and inertia of his predecessors, President Donald Trump has slashed U.S. military aid to Pakistan and warned that Washington will take further punitive measures unless the Pakistani government acts decisively against Islamist terrorists.

“They were just one of many countries that take from the United States without giving anything in return,” the president tweeted about Pakistan on Nov. 19. “That’s ENDING!”

But while the Trump administration has freely vented its frustration with Islamabad, current and former officials said it has been slow to seek justice for the 2008 massacre of 166 people — six of them Americans — in Mumbai, India, by a terrorist group that has worked closely with Pakistan’s intelligence service.

In 2011, federal prosecutors in Chicago indicted four Pakistanis, including a serving officer of the country’s powerful intelligence service, in connection with the Mumbai attacks. Yet after an initial flurry of effort by the Obama administration, the government has done little to press Pakistan to arrest those suspects or to condition U.S. support on progress in the hunt for the suspects, the officials said.

On Sunday, the State Department marked the 10th anniversary of the attacks with the administration’s first strong statement about the case. Secretary of State Mike Pompeo expressed solidarity with the people of India and said the “barbarity” of the massacre had “shocked the entire world.” He also added a rebuke to Pakistan.

“It is an affront to the families of the victims that, after 10 years, those who planned the Mumbai attack have still not been convicted for their involvement,” Pompeo said in a statement. “We call upon all countries, particularly Pakistan, to uphold their UN Security Council obligations to implement sanctions against the terrorists responsible for this atrocity, including Lashkar-e-Tayyiba and its affiliates.”

In addition, Pompeo announced that the department was offering $5 million through its Rewards for Justice Program for information leading to the arrest of anyone involved in planning or facilitating the attacks.

Nonetheless, critics say the administration’s lack of effort and attention until now shows that the matter has not been a priority. Earlier this year, a multi-agency group of national security officials agreed to prepare financial sanctions against the Mumbai suspects to try to force action by the Pakistani government. But soon thereafter, the officials involved were reassigned to other tasks, including a State Department campaign of counterterrorism measures against Iran, several officials said.

“The administration said they were going to get tougher, but it didn’t translate into action,” on the Mumbai case, said Jason Blazakis, who recently stepped down as director of the State Department’s office on counterterrorism finance and designations. “What are you doing as a government to bring these people to justice? Not a whole heck of a lot — and that’s unfortunate.”

The Pakistani government’s support for the deadly Mumbai attacks was especially brazen, U.S. and Indian investigators say. A well-trained team of 10 militants, deployed by boat and directed by phone from Pakistan, slipped into the city and stormed a Jewish center, Chabad House, as well as two luxury hotels, a restaurant and a train station. The three-day rampage of shootings and bombings outraged India, Pakistan’s neighbor and nuclear-armed rival.

The attacks exposed the Pakistani government’s patronage of and control over Lashkar, a militant group that has served as Islamabad’s proxy in the longtime conflict with India over the disputed border region of Kashmir. Successive governments have also long supported or tolerated the Afghan Taliban and other Islamist groups, a circumstance underscored by the 2011 killing of Osama bin Laden at his hideout in the Pakistani city of Abbottabad, less than a mile from a major military academy.

The Mumbai investigation provided extensive new evidence of the partnership between Lashkar and the powerful Inter-Services Intelligence Directorate, or ISI, of Pakistan. The FBI arrested a Pakistani-American businessman, David Coleman Headley, who confessed to conducting undercover reconnaissance in India. Headley was an operative of both Lashkar and the ISI, and he testified that they jointly designed, financed and directed the plot, intending to kill Americans and Jews as well as Indians.

An ISI officer known only as Major Iqbal served as Headley’s intelligence handler, overseeing his missions and helping select targets, according to case files. Headley identified his superior within Lashkar as Sajid Mir, a veteran militant who was charged with coordinating the plot. Phone intercepts recorded Mir’s calls from a high-tech command post in Karachi as he talked to a hostage in Chabad House, then ordered one of the gunmen to shoot the woman in the head.

Even before the al Qaeda attacks of Sept. 11, 2001, U.S. officials consistently subordinated their concerns about Pakistan’s ties to militants to other bilateral issues, including containment of the country’s nuclear weapons program. The Trump administration, like those of Presidents George W. Bush and Barack Obama, has focused primarily on urging Pakistan to act against the so-called Haqqani network — a Taliban group based in the country — and other Taliban groups that fight U.S. and Afghan troops from bases in Pakistani border areas.

Following the Mumbai attacks, the Obama administration pressed Pakistan to crack down on Lashkar. Chicago prosecutors indicted Major Iqbal in the murders of the American victims, making him the first serving ISI officer to face U.S. terrorism charges. Pakistan responded by arresting the chief of Lashkar’s military operations, but it took no known action against Major Iqbal, Mir or others accused of planning and directing the attacks. In addition to those indicted in Chicago, U.S. counterterror agencies have assisted an Indian investigation in which prosecutors have charged more than two dozen suspects.

Publicly, the Islamabad government denied any role in the attacks and questioned whether Major Iqbal even existed. But behind the scenes, U.S. officials said, the ISI moved him to a new unit and promoted him to the rank of colonel. Mir, meanwhile, remains “incredibly active” in Lashkar operations, one national security official said.

Pakistan has continued to protect the suspects not only to preserve its relationship with the militant group it sees as a bulwark in its operations in India and Afghanistan, but to shield itself from embarrassment or sanction and to safeguard sensitive information that they might reveal if arrested, counterterrorism officials and experts on the region said.

“It would require the introduction of the kind of evidence that the military and the ISI do not want shared,” said Stephen Tankel, a professor at American University and former Pentagon adviser on South Asia. “There’s also the risk of alienating a reliable proxy and setting a precedent that could come back to haunt the Pakistan military and ISI down the road.”

Of the few suspects whom Pakistan did arrest, several have been released. Others who remain in custody have been permitted by Pakistani authorities to oversee terrorist plotting while imprisoned, U.S. and Indian officials have said. The trial of seven suspects in Pakistan has lasted for years, and the proceedings have been repeatedly delayed by legal and technical problems.

In 2012, the Obama administration offered $10 million rewards for the capture of Lashkar’s religious leader, whom it accused of being involved in the Mumbai attacks, and another senior militant in the group. But as years passed without progress, Washington’s attention to the case faded, officials said. The Obama administration also stopped short of cutting aid so as not to imperil its collaboration with Pakistan on issues related to the war in Afghanistan, officials said.

Almost from the start of his presidency, Trump has taken a more confrontational approach, accusing Pakistan early this year of “nothing but lies and deceit.” His administration later lobbied successfully to put Pakistan on an international terrorism financing watch list. In September, the Pentagon redirected $300 million in military aid slated for Pakistan, and hundreds of millions more in aid have been suspended. During a recent Fox News interview, Trump alleged that Pakistan had sheltered bin Laden. 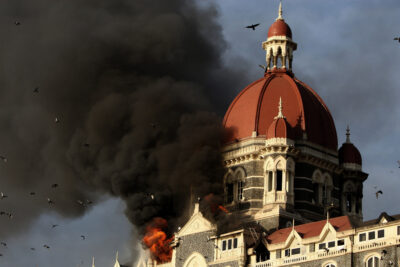 Responding on Twitter, Prime Minister Imran Khan of Pakistan criticized U.S. actions in South Asia and said his country had suffered 75,000 casualties fighting the war on terror. “Can Mr. Trump name another ally that gave such sacrifices?” Khan demanded.

But Trump has not talked publicly about the Mumbai case or Pakistan’s failure to capture the accused killers of Americans, including at least one Pakistani official. The White House and State Department did criticize Pakistan’s release last year of Lashkar’s religious leader from temporary house arrest. And Pompeo sent a message Sunday to Pakistan with his statement about the anniversary and the $5 million reward offer.

Lashkar still poses a formidable threat, officials said. The group is loyal to the Pakistani state, and it wields power through hospitals, charities and a political party. Lashkar has not carried out another major attack, but it remains a concern because of its interest in developing weapons of mass destruction and its activity in Afghanistan and Kashmir. U.S. intelligence detected an uptick this year in Lashkar operations involving drones and paragliders, counterterrorism officials said.

“I absolutely see Lashkar as a current threat,” said Blazakis, now a professor at the Middlebury Institute of International Studies at Monterey in California. “It has a state patron. It has sanctuary. It has a freedom to operate. What would happen if the group carried out another Mumbai? I shudder to think about India’s response. It could steamroll into a full war between India and Pakistan.”