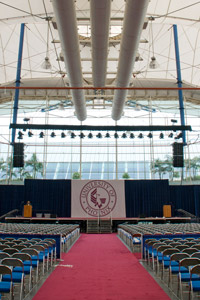 The University of Phoenix has 190 campuses operating in 39 states, the District of Columbia and Puerto Rico. The school says it has 420,000 students and tens of thousands of employees at its schools of nursing, business and education, among others.

But it does not have a law school. Maybe it should.

In an official response (PDF) to our report on enrollment abuses at Phoenix, the university's parent company -- Apollo Group -- made a legal mistake so basic that, when told about it, a law professor we consulted was momentarily at a loss for words.

In a joint investigation with Marketplace, we found a dozen current and former students, as well as two former enrollment officers, who said that Phoenix uses misleading tactics to coax people into signing up for school and, in many cases, for large government loans. Phoenix has become the single largest recipient of federal student aid, with more than $3 billion from government loan programs last year.

Responding to our reports, Apollo wrote that "it is entirely appropriate and lawful for schools to pay recruiters in part based upon how well they perform their job."

The company said this view was "recently confirmed" by the 9th U.S. Circuit Court of Appeals. Claiming to quote the "Court," Apollo said, "If academic institutions could not pay recruiters based upon their ability to recruit students, 'you could never have any performance criteria for that particular job.'"

Here's the problem: The quote came from an oral argument -- not the court’s final decision. In fact, the final ruling was procedural. The judge's statements did not "confirm" Apollo's views, according to Jack Beermann, a law professor at Boston University.

"That's an inaccurate statement because if it's only one judge making a comment in argument, it certainly wasn't confirmed by the court," he said.

Knowing the difference between what a judge says in oral argument, and what the court writes in its official opinion, is one of the first and most fundamental lessons taught at law school, Beermann said.

"It's so basic," he said. "Judges may say many things in oral argument that they would never adopt as an actual decision." They could be testing ideas or playing devil's advocate. "And when only one of the three judges speaks, it's not a reliable guide to what the entire court thinks," Beermann said.

We pointed out the mistake to Apollo. The company changed part of its statement but still incorrectly maintains that the court "confirmed" its views on paying recruiters.

For the record, our reporting never claimed that it is illegal to pay recruiters according to how well they do their jobs. As we said, that's legal -- within limits set by U.S. Department of Education rules. Our report focused on allegations by former enrollment counselors and students who said recruiters lied about whether Phoenix credits will transfer and about the terms of financial aid; pressured people to sign up by falsely claiming class space was scarce; and won students' trust by befriending them. Students were left feeling they had been duped into signing up and taking on large debt.

Apollo recently announced that it expects to pay $80 million to settle a lawsuit brought by two former employees who allege that Phoenix defrauded the government's student aid program by paying recruiters solely on the basis of enrollment, which is not allowed under Education Department rules.

We’re Losing Our Humanity, and the Pandemic Is to Blame