It's a subject that has gotten limited play in the American press, but has held the attention of the international press for weeks, even months: In Germany, news of sexual abuse and negligent oversight in the very archdiocese once headed by Pope Benedict XVI has been a developing story, while in Ireland, sexual abuse by the clergy has been in the news for months. The pope wrote a letter to the Irish Catholic Church last week. The letter, while apologizing to abuse victims and urging greater accountability within the church, notably neglected to mention the investigation into what was once his own diocese in Germany. It also failed to quell growing demands for the resignation of leaders in the Irish church who knew sexual abuse was being covered up. Several bishops have offered their resignations to the pope; today, he accepted the resignation of one. 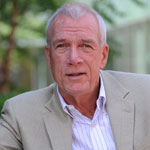 Interested -- both as a journalist and a bystander -- I called up Pulitzer Prize-winning journalist Walter Robinson for some context on the recent flare-up involving clergy scandals in Europe. For seven years, Robinson led The Boston Globe's investigative unit, which in 2002 and 2003 documented sexual abuse within the Boston Archdiocese. The coverage won the 2003 Pulitzer Prize for  Public Service. Robinson is now a professor of journalism at Northeastern University. Here is what he had to say:

I'm sure you've been following the Catholic Church abuse scandal that has been flaring up recently in Germany and elsewhere. Tell me a little about how this compares to what you found in Boston.

I've been following it with some interest. I've always maintained that the problems that were so obvious and widespread in the Boston Archdiocese were no different than any other diocese in the United States, or really anywhere in the developed world. It isn't that there was something strange in the water in Boston that made priests abuse children. It's just that because of our good fortune, and our collective good fortune in getting the courts to order the church to release all the personnel files, we got a much better idea in Boston of how common and widespread the problem was. And this part is important, given how focused the church has been everywhere in keeping this covered up.

The situation in Germany is particularly of interest because for years, the pope -- then known as Cardinal Archbishop Joseph Ratzinger -- oversaw the Munich and Freising Archdiocese. News reports vary on how aware Ratzinger was of a particular priest who had repeatedly molested boys, and one of the pope's deputies has since taken responsibility for the personnel mistakes that led to further abuse. Your thoughts?

The fact we have one archbishop in Munich that claims not to know anything is enough to make one suspicious. So the question is, if there was complicity by the pope himself, how do you get the evidence? And the evidence is in the recollections of priests who were involved who would know, the evidence is in the personnel files, and I'm not sure under German law whether there is any way whether civil authorities could force the release of those files. ... One thing is certain. The church went to such great lengths to protect its bishops and archbishops in the U.S., you can imagine how far they'll go to protect the reputation of the pope.

It seemed that in the Boston situation, documents were really key to tying higher-ups in the Catholic Church to what was happening with the priests in Boston. Do you think that's going to be possible elsewhere?

I've kind of a mixed mind about that. It depends on the jurisdiction. The amount of public disclosure in heavily Catholic countries has really been minimal.

The exception to that is Ireland. In Ireland the problem was so widespread that eventually -- a combination of the victims and finally, with law enforcement which had colluded with the church for years -- enough pressure brought to bear that in Ireland there was more disclosure. What's happening now particularly to Germany and the Netherlands is interesting because the pattern shows that disclosure is much more likely in secular countries. I'm surprised, frankly, it took this long for details to emerge about what happened on the watch of the former archbishop of Munich. In countries like Spain, Portugal, Italy, there's been virtually no disclosure, but in those countries you have, I think it's fair to say, the church, government and press, and none of them have an interest in this issue becoming public. In countries in Latin America, the same phenomenon is at work.

The pope wrote a letter to Irish Catholics last Friday, addressing the abuse scandal that has been blowing up over there in recent months. What did you make of that letter?

It was very surprising. For the Vatican to acknowledge anything is a surprise. ... The hubris is astonishing -- that the church thinks that only the church should hold itself accountable, and that the public and civil authorities have no ability to interfere or intercede with church affairs. When it comes to criminal activity in which young children are sexually molested, it's a hard position to take for any institution that wants to retain moral authority.

In terms of enforcement, in the letter, the pope did call on bishops to cooperate with authorities in investigations of sexual abuse. Slate has reported that the pope's now taking a "hard line" on how the church handles sex abuse. Do you think that this letter marks a real shift in how the Vatican deals with these cases, and whether it'll let its own members be held to account outside of the Catholic Church -- or is it still pretty cautious?

I think it's still pretty cautious. The church is walking a fine line. It wants to retain its right to manage and provide oversight for its own shortcomings, but it recognizes that if it stonewalls local authorities, the church will lose in the long run and laws will be passed that force the church to provide much more information.

There's an Associated Press story about how the number of clergy sexual abuse complaints has dropped in the U.S. Why do you think that is -- has the situation really improved here?

Yes it has. Partly because, just to give you Massachusetts as an example, under laws in most states, certain people have the legal obligation -- social workers, teachers, for instance -- to report any allegation of sexual abuse or regular abuse of a child. If they don't report it, they can go to prison. Because of what happened with the church here, we have a new law that requires members of clergy of any faith to report abuse -- it includes them in the category of mandated reporters. The church has also reacted with special training, and there are all sorts of precautions to make sure people who work with children are properly vetted.

The extent of abuse has gone down markedly. It still occurs in all walks of life and all parts of society, but there are two things going on with the church. The first thing is their main goal was to protect the church from scandal. The second was their view of the abuse itself -- and this was fairly naive -- wasn't that it was a pathology or illness, but that it was a sin, and that if the priest repented of his sin, they could reassign him to another parish. That went on -- we say for decades, but no doubt has gone on for centuries -- and that view has changed pretty radically. The church now recognizes that somebody who molests children should not be put in a situation where he can further molest children.

Editor’s Note: A Review of Criticisms of a ProPublica-Vanity Fair Story on a COVID Origins Report