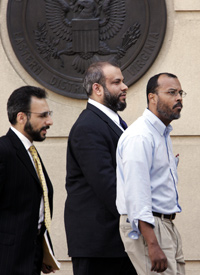 The National Security Agency may start its first investigation into "whether its eavesdropping program had improperly interfered with an American's right to a fair trial," says the New York Times.

The case involves Ali al-Timimi, a Muslim cleric serving a life sentence following his conviction on terrorism charges in 2005. Al-Timimi's lawyer claims the Bush administration "tried to hide the full extent of the government's illegal spying" in al-Timimi's case, in an effort to withhold evidence that could have exonerated the spiritual leader once described as a "rock star" of Islamic fundamentalism.

The Times suggests al-Timini's lawyers have evidence to back up the assertions that warrantless wiretapping was used in the case:

A review of the public court file in Mr. Timimi's case, which includes the titles of classified filings, also strongly indicates that the court has received evidence that the N.S.A. was used to intercept conversations... But the government has never publicly acknowledged that it used the N.S.A. program to intercept conversations between the two men.

Al-Timini's lawyers argue, according to the Times, that the "interceptions might include evidence that would point to his innocence in what they regard as a free-speech case. They charge that the government has intentionally withheld that material despite repeated requests."

And the judge in the case seems to agree that some kind of evidence is being withheld. According to the Times, the judge "stated that she believed that the government appeared to have committed violations of federal rules governing evidence and discovery."

The Justice Department denies the allegation, but chairman of the House Select Intelligence Oversight Panel, Rep. Rush Holt (D-WV), told the Times that he plans to ask the NSA's inspector general to open an investigation into the matter.

The NSA's illegal wiretapping was first exposed by the New York Times in 2005 and has been the subject of intense legal and congressional debate.

President-elect Obama's position on the wiretapping program isn't terribly clear. He has vowed to "carefully monitor the program" and "work with the Congress to take any additional steps I deem necessary to protect the lives -- and the liberty -- of the American people."

Obama angered liberal supporters when he voted in favor of a bill that granted immunity from prosecution to all telecommunications companies for their role in the Bush administration's spying program.

That same bill, however, also provided for review by the inspectors general of the security agencies.