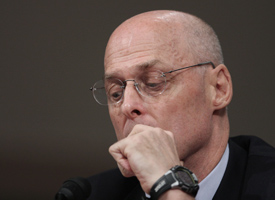 Former Treasury Secretary Hank Paulson said last October that the taxpayers shouldn't fret about putting $250 billion in the nation's banks: "This is an investment, not an expenditure, and there is no reason to expect this program will cost taxpayers anything."

But a draft report from the Congressional Oversight Panel for the TARP says Paulson should have known better. According to the panel's analysis, the preferred stock and warrants Treasury received are worth far less than the investments themselves, amounting to at least a $43 billion subsidy to the banks. That shortfall, they found, was inevitable from the structure of the investments. That's because the analysis âdemonstrates that the value received â including the marketâs estimate of its future worth â was considerably less at the time of the transaction than the amount paid by Treasury.â

In other words, there was every reason to believe the program would cost taxpayers a lot.

The subsidy climbs even more, to $78 billion, when you add in Treasury's investments to prop up ailing institutions like AIG and Citigroup. As of the report's completion, the Treasury had used $254 billion to buy stakes in banks and AIG, meaning about a third of that was a giveaway. A breakdown of the panel's analysis of the size of the subsidies by institution is below the fold.

Update: The panel has posted the final version of the report here (PDF).

First, the eight largest bank investments, excluding the extra help given to ailing Citigroup and Bank of America:

Next, an analysis of two of the emergency interventions (the analysis was done before Bank of America received an extra $20 billion last month):

As always, you can see a complete, up-to-date list of the banks and other companies that have gotten bailout money here. Since the report's completion, the Treasury has continued buying stakes in the nation's banks. That means the giveaway amount has continued going up. Assuming about a third of the $285 billion invested to date is a kind of subsidy, that means the total subsidy has climbed to $85.4 billion.

The report, signed by the panel's chair, Harvard Law Professor Elizabeth Warren, cautions that it's possible the Treasury's investments might pan out miraculously well. It's also possible it will be worth much less.

The panel hired an international valuation firm to perform the analysis. An analysis by the Congressional Budget Office last month came to a similar conclusion.

The reason for the shortfall, Warren writes, was inherent in the way Treasury structured the deals: they were "certain to create significant subsidies." For one, the terms were crafted to attract a broad array of participants. And they were one size fits all, regardless of the credit risk of the bank. Even in the cases of AIG and Citi, where the Treasury crafted unique terms, they were generous.

Warren does allow that the purpose of the Treasury's program was not to make a buck, but rather to support the financial system. For the purpose of this report, at least, she sets aside the question of whether these subsidies are a bad idea. But she does hint that Paulson wasn't straightforward about the costs, and that's got to change: "if TARP is to garner credibility and public support, a clear explanation of the economic transaction and the reasoning behind any such expenditure of funds must be made clear to the public."