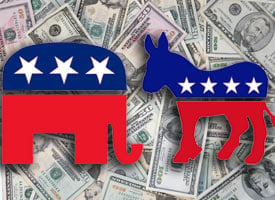 With the presidential campaign entering the final stretch, we thought we'd dig into what rules govern how the candidates can raise money, and from whom.

We wrote earlier about the rules governing financial contributions at the conventions, but a different set of rules apply to general campaigning.

This year, for the first time, a candidate has declined federal dollars to finance his bid for the White House. Sen. Barack Obama chose to raise his own funds, which means his staff is subject to a different set of rules than those governing Sen. John McCain, who is using the public funds.

Established in 1976, the public financing system entitles the major party nominees to take up to $84 million of taxpayer funds for their campaign.

In return, candidates agree not to take private donations, so they're effectively limited to the $84 million.

Sen. John McCain, who raised $104 million in the first quarter of 2008 (before he was designated as the Republican's nominee), has opted to go with the public system. Apart from getting money from the government, that also means the Federal Election Commission will audit McCain's spending.

Obama has bet on his ability to pull in more than $84 million in the two-plus months between being named the party's nominee at the convention and the November election. He appears to be on track, having raised $66 million in August.

Obama's staff must vet all of those contributions to ensure they comply with federal campaign finance laws, something McCain will obviously not need to worry about.

The rules are set out in the Federal Election Campaign Act (and this table), which limits individuals to giving $2,300 to their candidate per election cycle.

They can, of course, give money to political action committees. Supporters can donate to PACs, which in turn can give up to $2,300 directly to a candidate and a lot more, $28,500, to a national committee.

PACs can also spend an unlimited amount on "independent" advertisements, which means they can't use the candidate's campaign materials or even discuss their ad with the campaign team. Then there are 527 committees, which report to the IRS instead of the FEC, and have fewer reporting requirements.

While much has been made of Obama's superior fundraising, the Republican National Committee actually has significantly more cash than the Democrats. According to the FEC's most recent available figures, the Republicans had $75 million to the Democrats' $7.8 million at the end of July. (New figures, for August, come out this Saturday.) The committees can spend their money on ads endorsing candidates and get-out-the-vote drives.