Last month, the Department of Defense proposed an amendment to the Military Lending Act that would ban lenders from charging service members interest rates of more than 36 percent. The proposal followed a ProPublica investigation into high-cost military lenders that circumvent the limited scope of the current law to generate longer-term loans at sky-high rates.

The amendment will be open for public comment through Nov. 28. In the meantime, here's some of what we have learned so far about the military-lending industry.

That's according to a survey of service members in an April report from the Department of Defense. The report estimated that up to a quarter of service members "may face emergency financial short-falls and indicate difficulties managing their finances and avoiding problems with credit."  Twenty-six percent also said they "occasionally have some difficulty making ends meet."

In some states, storefront lenders can charge annual percentage rates of up to 400 percent 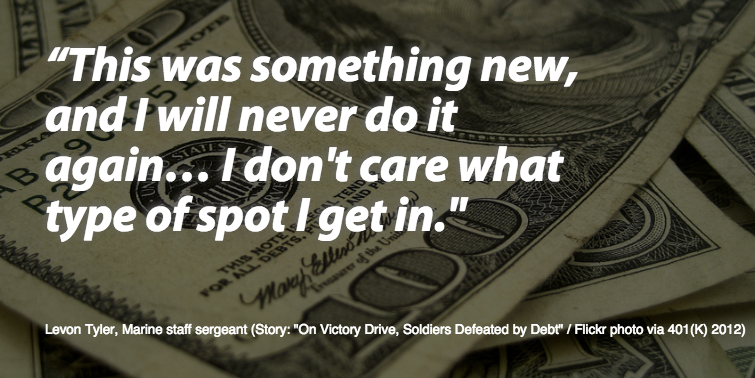 In our 2013 investigation, we talked to Levon Tyler, a Marine staff sergeant who handed over the title to his car and a copy of his keys for a $1,600 loan at Smart Choice Loans. What he didn't realize was that he had agreed to pay more than $17,000 over two and a half years in return, since the loan's annual interest rate was 400 percent.

Although these interest rates are precisely the types of loans that the Military Lending Act was written to protect against, they fall outside its current jurisdiction because of the duration of the loan.

The MLA, as it was enacted in 2007, caps interest rates for military borrowers at 36 percent for very specific types of loans: mainly, short-term payday loans and auto title loans. The current proposed changes would ban interest rates above 36 percent even on longer-term payday and auto-title loans like Tyler's. The amendment would also restrict interest rates on another type of high-cost loan — installment loans.

A ProPublica review of a loan of around $2,500 made to a soldier in Georgia showed that the loan carried an annual rate of 43 percent. But with insurance products, that rate nearly doubled to 80 percent. The MLA does not currently cover these loans, but if the proposed amendment passes, they would be subject to the same 36 percent cap.

What's the difference between a payday and installment loan? (MarketPlace) »

Even if Congress passes caps on interest rates, "purchase-money" loans wouldn't be affected

"Purchase-money" loans refer to financing provided to buy a vehicle or other personal property — the kinds of loans made by companies like USA Discounters. In our investigation of this high-cost lender, which has since changed their name to USA Living, we found the creditor "guaranteed" financing of electronics, appliances, and other purchased goods. But purchase-money loans (along with residential mortgage loans) are exempt from the MLA, and the proposed amendment doesn't extend protections for these loans.

Companies can also collect interest on purchases that are marked up and include add-on charges. 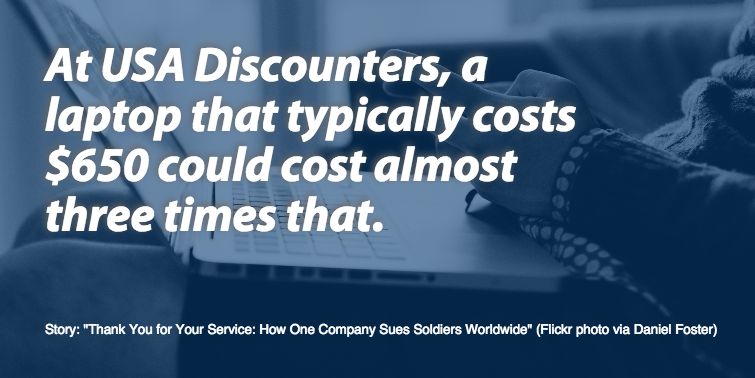 When military borrowers move (as they often do), companies can sue from out of state 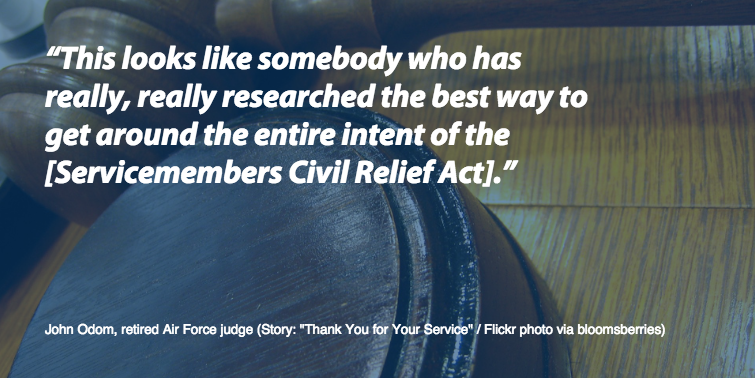 The federal Servicemembers Civil Relief Act was designed to give service members opportunities to defend against lawsuits, but it doesn't address where they can be sued.

That's why USA Discounters was allowed to sue out-of-state borrowers in Virginia, where the company is headquartered. Although this retailer presents a rare case, under state law, companies can file suit in a state as long as some part of the business was transacted there, regardless of where the plaintiff resides. But Carolyn Carter of the National Consumer Law Center said USA Discounters' tactic is "designed to obtain default judgments against consumers without giving them any real opportunity to defend themselves."

Since then, the company has pledged to reform their policies to more actively inform borrowers that they have the right to request being tried in a different court.

In Virginia, a company suing a service member can recommend which lawyer should be appointed to represent the defendant.

We looked at USA Discounters' recent cases in July, and found that the company usually chooses a local attorney to represent service members in their lawsuits. For a $35 fee, one attorney sends borrowers a letter with the following fine print: "I have not been appointed by the court to defend you on the merits of this case in anyway. My only obligation is to review your response and request any additional stay or continuance if I feel it is appropriate given your answers."

State laws governing how long debt collectors can pursue debts can vary, but generally, court judgments for debt collection are enforceable for 10 to 20 years, according to The Center for Responsible Lending. Our investigation found that Virginia court judgments on debts can be enforced for years, regardless of whether a service member has retired or where he or she might live.

For instance, after Sgt. LaShonda Bickford and her then-husband fell behind on payments to USA Discounters, the company won a judgment in Virginia for over $15,500. The 2011 judgment continued to grow at the contracted interest rate of 18 percent, and by late 2013 her debt stood at over $21,000.

Once debt collectors win a judgment, they can empty a debtor's bank account

Federal law prohibits debt collectors from garnishing more than 25 percent of a debtor's total wages for consumer debt, and state-level limits on wage garnishment vary widely. However, federal law does not limit the amount that can be garnished from a consumer's bank account, which means collectors can empty debtors' accounts once they win the lawsuit.

USA Discounters routinely sues service members who are behind on payments and obtains judgments to garnish their wages to pay back the debt.

That's because admitting to trouble with paying back debt can result in soldiers losing their security clearance. Michael Hayden, director of government relations for the Military Officers Association of America, told us that soldiers typically end up refinancing rather than disclosing debt to gain access to zero-interest loans.

If you want to know more about military lenders' practices and the reporting that informed this piece, read more about how USA Discounters sued service members worldwide and the loopholes that make suing soldiers easy for lenders. We also collaborated with MarketPlace on an investigative series about military borrowers.

Have you ever been sued over a debt? You can help us report on predatory lending practices by telling us your story.