Feb. 10: This article has been corrected.

Flipping through the New York Times magazine a few Sundays ago, former hospital executive Paul Levy was taken aback by a full-page ad for the da Vinci robot.

It wasn’t that Levy hadn’t seen advertising before for the robot, which is used for minimally invasive surgeries. It was that the ad prominently featured a dozen members of the surgery team at the University of Illinois Hospital and Health Sciences System. “We believe in da Vinci surgery because our patients benefit,” read the ad’s headline.

“While I have become accustomed to the many da Vinci ads, I was struck by the idea that a major university health system had apparently made a business judgment that it was worthwhile to advertise outside of its territory, in a national ad in the New York Times,” Levy, former chief executive of the prestigious Beth Israel Deaconess Medical Center in Boston, told me by email.

As Levy scanned the ad further, he noticed that at the bottom the ad bore a copyright for Intuitive Surgical Inc., the maker of the da Vinci system. It included this line: “Some surgeons who appear in this ad have received compensation from the company for providing educational services to other surgeons and patients.” 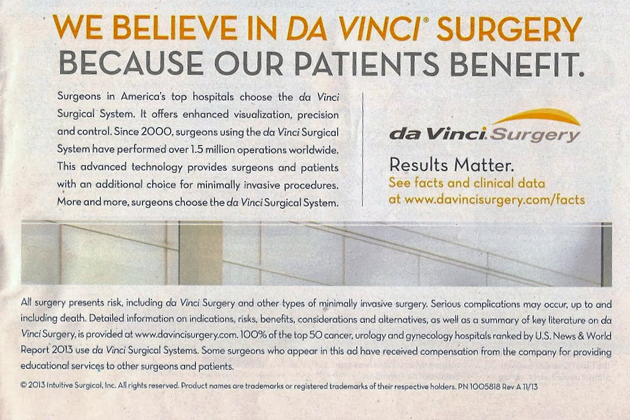 Ads for prescription drugs and medical devices are common, and some feature physician testimonials about why they believe the product works. Physicians also deliver promotional talks for drug and device makers, something we’ve covered extensively in our Dollars for Docs series.

But a whole hospital department? Levy wondered: Was this kosher?

“I was stunned that a public university would allow its name and reputation to be used in that way,” he wrote. “The next day, I did a little research on the university’s own website and confirmed that my initial reaction was correct: The ad violated the University’s code of conduct and administrative procedures, and likely state law.”

Da Vinci robotic systems aren’t cheap. The Wall Street Journal reported last year that they can cost up to $2.2 million each, and questions have been raised about their value. A study found that deaths and injuries caused by the robots are going underreported to the U.S. Food and Drug Administration. And the American Congress of Obstetricians and Gynecologists said in a statement last year: “There is no good data proving that robotic hysterectomy is even as good as—let alone better—than existing, and far less costly, minimally invasive alternatives.”

Levy, who runs a blog called Not Running a Hospital, began writing a series of posts about the ad. The first, called Time to Fire Somebody, ran on Jan. 22. “The University has allowed its reputation to be used in a nationally distributed advertisement produced and owned by a private party, in benefit to that party's commercial objectives. This is not consistent with ‘exercising custodial responsibility for University property and resources,’” it said.

Levy subsequently wrote a post noting that some of those who appeared in white coats in the ad weren’t doctors; one wasn’t even a medical professional, instead serving as the administrative director of the University of Illinois at Chicago Robotic Surgery Training Center, according to her LinkedIn profile.

Levy found that the university’s campus administrative manual appears to prohibit such advertising: “In general, the University cannot permit its image to be used in any commercial announcement, in a commercial or artistic production, including the World Wide Web or in any other context where endorsement of a product, organization, person, or cause is explicitly or implicitly conveyed,” the manual says.

Subsequent posts focused on the hospital’s board of trustees, Intuitive’s disappointing earnings, and the compensation received by the dean of the University of Illinois College of Medicine at Chicago  for serving on the board of directors of  drug maker Novartis. Levy forwarded the posts to the president and trustees of the university and suggested that they investigate.

Then, one day this month, Levy received an email from Thomas Hardy, the University’s executive director of university relations. It said the ad was paid for by Intuitive, the da Vinci maker, and that neither the university nor those pictured were compensated for appearing in the ad. Nonetheless, Hardy’s note continued,

“We asked Intuitive to suspend the ad, and the company agreed, immediately upon learning of concerns expressed about it. Our request was based on a business decision; we were concerned that the ad was not benefiting UI Health. Out of an abundance of caution, we decided to review circumstances surrounding the publication of the advertisement.  We will use this opportunity to conduct a methodical assessment of policies, guidelines, procedures and practices, and where corrective changes are required we will take the appropriate action.”

The president of the University of Illinois system asked his vice president for research to investigate the matter and report back to him by March 15 if policies had been violated.

By writing about the issue, Levy appears to have made an impact on how the university navigates commercial relationships.

But the university and Intuitive are not patting Levy on the back.

In response to questions from me, Hardy reiterated what he had told Levy and also pointed me to a Boston Globe opinion column that faulted Levy for lapses in judgment in a personal relationship with a female employee while he led Beth Israel Deaconess. Levy was fined $50,000 by the hospital’s board of directors.

When I asked Hardy how this was relevant, he wrote in an email, “I believe if you’re attributing claims and accusations to the blogster, your readers deserve to know his reported background so they can make an informed decision about his credibility…Wanted to make sure you have the pertinent information.”

Levy said he had admitted his errors publicly and apologized.

Intuitive spokeswoman Angela Wonson said in a statement that she believes the ad was appropriate and that the testimonials from university staff were unpaid.

“Medical schools and their affiliated hospitals are our customers and play an important role in training surgeons. In the past year, there has been much misinformation about robotic-assisted surgery, spread largely by plantiffs’ lawyers as well as segments of the health-care community threatened by our groundbreaking technology. Intuitive’s advertising campaign is intended to educate both the medical and patient communities by using factual information from independent, peer-reviewed studies that prove the safety of our system. The University of Illinois, which uses our technology, and the people featured in the advertisement agreed to appear without compensation. Those who use our technology see first-hand the outcomes resulting from its use. Their unpaid testimonials of da Vinci surgery are credible and sincere.”

Levy first questioned the value of the da Vinci in a blog post in 2007, but a year later, he wrote about how his hospital bought one anyway. “Why? Well, in simple terms, because virtually all the academic medical centers and many community hospitals in the Boston area have bought one. Patients who are otherwise loyal to our hospital and our doctors are transferring their surgical treatments to other places,” he wrote.

Other medical device companies also use doctors in their ads and videos. Hologic Inc., which makes a 3D mammogram machine took out an ad in a trade journal last year featuring the staff of Methodist Hospitals in Merrillville, Ind. And Accuray, which makes the CyberKnife, a competitor for the da Vinci system, includes physician testimonials in videos on its site. One video features a physician from Beth Israel Deaconess. The videos do not disclose if the doctors have been paid.

“Accuray does not typically reimburse physicians to participate in the video testimonials on the website and they are not considered company spokespeople,” the company said in a statement. “Some of the physicians and/or their institutions may have received payment for other activities, such as speaking at an educational or medical conference, or for conducting research.”

Beth Israel spokesman Jerry Berger said its doctor, Irving Kaplan, “was approved under the policy we had in place when the video was shot in 2011. He was not compensated for the appearance.”

Levy said he has a financial relationship with EarlySense, which makes equipment to monitor heart rate, respiration and patient movement. He sits on the company’s advisory board. It is not a competitor to Intuitive.

Correction, Feb. 14, 2014: An earlier version of this story incorrectly spelled the name of Merrillville, Indiana as Merryville, Indiana.