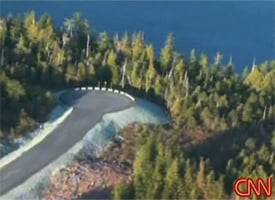 Your update on "Nowhere": Not much has changed.

The $26 million gravel road that Gov. Sarah Palin's administration constructed on nearly uninhabited Gravina Island still leads to an empty beach. And her administration is still planning on using $73 million in federal dollars to construct a better link between the town of Ketchikan and the island.

"I don't think it's any more useful than when [the road] opened," Ketchikan Mayor Bob Weinstein told ProPublica. "Occasionally someone tells me they went to see it, ran or otherwise traversed it. I always ask if they saw anyone else. The answer is invariably 'no.'"

During the presidential campaign, Republican vice presidential nominee Palin trumpeted her supposed opposition to the infamous $400 million "Bridge to Nowhere" project. She'd told Congress, "Thanks, but no thanks," she said again and again, giving the impression that she'd rebuffed the $223 million in earmarks Alaska's congressional delegation had secured for the project.

But as a number of media reports pointed out, Palin had actually supported the bridge project during her 2006 campaign for governor. ProPublica reported that, contrary to Palin's declarations that her state would complete the project with its own money, the state had actually set aside $73 million of the earmarked money to complete the project -- either via a bridge or a larger ferry than the one that currently links Ketchikan to its airport on the island.

Seventy-three million dollars is still set aside for the project, Alaska DOT spokesman Roger Wetherell told us. The DOT is currently evaluating alternatives and expects to arrive at a decision in early 2010.

We also reported that Palin's administration had overseen the construction of a $26 million road -- built with earmark dollars -- that led to an empty beach. The road had been a part of the original Bridge to Nowhere project, ended by Palin in 2007 because the state was short the several hundred million dollars needed to complete it. But an earmark for an access road to the bridge on Gravina Island still remained, and the state DOT determined that the money could be used for no other purpose. Rather than pass over free federal money, Palin's administration built the road.

Still, Lois Epstein, director of the nonpartisan Alaska Transportation Priorities Project, said Palin was overall doing a better job than her predecessor of being "realistic" in the transportation projects undertaken by the state. "There's such a culture here of 'let's dream, let's build large,'" she said, and Palin has been sending signals of late that she's more inclined to spend money on existing infrastructure rather than mammoth projects.