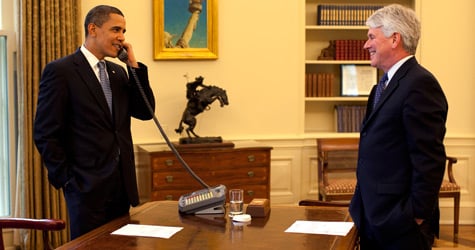 With four months left to meet its self-imposed deadline for closing the U.S. military prison at Guantanamo Bay, Cuba, the Obama administration is working to recover from missteps that have put officials behind schedule and left them struggling to win the cooperation of Congress.

Even before the inauguration, President Obama's top advisers settled on a course of action they were counseled against: announcing that they would close the facility within one year. Today, officials are acknowledging that they will be hard-pressed to meet that goal.

The White House has faltered in part because of the legal, political and diplomatic complexities involved in determining what to do with more than 200 terrorism suspects incarcerated at the prison. But senior advisers privately acknowledge failing to devise a concrete plan for where to move the detainees and mishandling Congress.

To address these setbacks, the administration has shifted its leadership team on the issue. White House Counsel Gregory B. Craig, who initially guided the effort to close the prison and who was an advocate of setting the deadline, is no longer in charge of the project, two senior administration officials said this week.

Craig said Thursday that some of his early assumptions were based on miscalculations, in part because Bush administration officials and senior Republicans in Congress had spoken publicly about closing the facility. "I thought there was, in fact, and I may have been wrong, a broad consensus about the importance to our national security objectives to close Guantanamo and how keeping Guantanamo open actually did damage to our national security objectives," he said.

In May, one of the senior officials said, Obama tapped Pete Rouse -- a top adviser and former congressional aide who is not an expert on national security but is often called in to fix significant problems -- to oversee the process. Senior adviser David Axelrod and deputy communications director Dan Pfeiffer were brought in to craft a more effective message around detainee policy, the official said.

"It was never going to be easy, but we have worked through some of the early challenges and are on a strong course," Pfeiffer said.

In order to empty the prison, the administration will need to find facilities to house 50 to 60 prisoners who cannot be released and who cannot be tried because of legal impediments, according to an administration official. The administration must also win congressional funding for the closure process, find host countries for detainees cleared for release, and transfer dozens of inmates to federal and military courts for prosecution.

Three administration officials said they expect Craig to leave his current post in the near future, and one said he is on the short list for a seat on the bench or a diplomatic position. Craig has long made clear his desire to be involved in foreign policy, but he declined to comment on his plans. 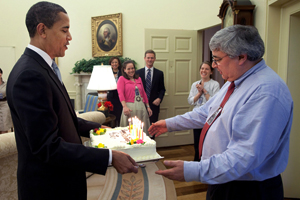 "Guantanamo was everyone's part-time job," said a senior official, one of several interviewed for this article who insisted on anonymity to discuss internal deliberations. Now, the official added, Rouse is coordinating them.

Before the election, Craig met privately with a group of top national security lawyers who had served in Democratic and Republican administrations to discuss Guantanamo. During the transition, he met with members of the outgoing administration, some of whom warned him against issuing a deadline to close the facility without first finding alternative locations for the prisoners.

Although the move was approved by all of the president's senior advisers and, ultimately, the president himself, the deadline came at the suggestion of Craig, according to two senior government officials involved in the process. Craig declined to comment on internal discussions.

Craig oversaw the drafting of the executive order that set Jan. 22, 2010, as the date by which the prison must be closed.

"It seemed like a bold move at the time, to lay out a time frame that to us seemed sufficient to meet the goal," one senior official said. "In retrospect, it invited a fight with the Hill and left us constantly looking at the clock."

"The entire civil service counseled him not to set a deadline" to close Guantanamo, according to one senior government lawyer.

In those early months, Craig was unquestionably the central figure in the effort to shut Guantanamo. In an interview with The Washington Post in February, Craig said he was managing the closure "on a day-to-day basis."

Craig began personally reviewing the cases of each detainee at the facility, and was one of the first senior officials to travel to the prison, visiting Guantanamo on Feb. 18, ahead of Attorney General Eric H. Holder Jr.

But as time wore on, congressional staffers said, they stopped hearing from Craig. Although there were periodic briefings with members of the Justice Department's task forces, there was no longer a point person from the White House who appeared to be shepherding the issue, according to one Republican aide. Craig became involved in other issues, such as vetting, ethics and the nomination of Sonia Sotomayor to the Supreme Court.

Senior administration officials said the central roadblock during those early months was the condition of the detainee files, which had been left in disarray by the previous administration.

"We assumed that for each detainee there was going to be a file somewhere," one senior administration official said. "Some of the intelligence files were not even organized by detainee. You had to go into a mainframe database and search the name of the detainee to put together a file. So there were weeks, if not months, of putting together the files of detainees that then could be reviewed by the fresh eyes that we wanted." 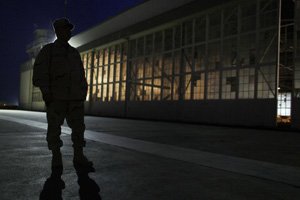 As the process was getting underway in the spring, the administration began losing support for shutting the facility, in part, officials now say, because the White House did not present a concrete plan for what it would do with the remaining terrorism suspects.

After news reports that 17 detainees -- Chinese Muslims known as Uighurs -- were going to be moved to the Virginia suburbs, lawmakers balked.

Then in May, the Senate decided, by an overwhelming vote of 90 to 6, to block funding for shutting Guantanamo -- Obama's first major legislative setback as president.

Public displeasure with the decision to close Guantanamo grew. Fifty percent of those surveyed in June said they disapproved of closing the facility, according to a Washington Post-ABC News poll, up significantly from a Pew poll in February.

Republicans pounced on the Guantanamo closure, alleging that it would make America "less safe." Senate Majority Leader Harry M. Reid, D-Nev., protested that Democrats would "under no circumstances" move forward without more specifics. The following month, Congress passed an appropriations bill that required the administration to report its plans before moving any detainee out of Guantanamo and prevented it from using available funds to move detainees onto U.S. soil.

Six pending pieces of legislation would make it harder for Obama to close the prison and transfer detainees to the United States or foreign countries.

After the congressional setbacks, Craig orchestrated the release of four of the Uighurs, flying with them and a State Department official from Guantanamo to Bermuda, a self-governing British territory whose international relations are administered by Britain.

The transfer produced a diplomatic rift. British and U.S. officials said the Obama administration gave Britain two hours' notice that the Uighurs were being sent to Bermuda. "They essentially snuck them in, and we were furious," said a senior British official. The move also caused friction between Britain and China, which seeks the Uighurs for waging an insurgency against the Chinese government.

Late Thursday, White House Chief of Staff Rahm Emanuel offered a defense of Craig, saying he "played a critical role in pursuing the president's goal of ensuring that we protect our nation's security interests in a manner that is consistent with our laws and our values."

One administration official was more effusive. "Greg Craig is a hero," the official said. "He took responsibility for this policy from the beginning, and he has guts and character. If we can't get it done by the deadline, then at least we'll have done as much as we can as smoothly as we could have."

In coming weeks, officials say, they expect to complete the initial review of all the files of those held at Guantanamo.