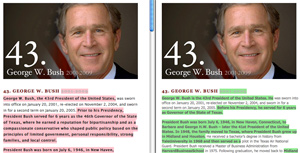 References to Bush creating "prosperity" through "an ownership society" are stripped in the new version, and praise of the No Child Left Behind Act has been softened.

We contacted the White House for comment, and a spokesman told us that the version of the biography currently on Whitehouse.gov is actually not new, but an old one written at the end of the Bush administration.

Our research says otherwise. The biography preserved in the National Archives is a near-perfect match for the old version, suggesting that the version now on Whitehouse.gov is, indeed, new. (Peter Bray, founder of Versionista, the system that drives ChangeTracker, just wrote a piece in Slate about the changes.)

Other changes were less political.

Feline fanciers might be upset by the unceremonious deletion of the family cat, India "Willie" Bush, who passed in January. But, the addition that the president and first lady "met at a friend's backyard barbeque" is certain to satisfy Texans.

So, what do you think? Are the victors rewriting history, or is this just a tempest in a Twitter?