Of all the reports that have come out of Salim Hamdan's trial for providing support for terrorism, the first U.S. war crimes hearing since World War II, one of the oddest was the testimony of Michael St. Ours. St. Ours, an agent with the Naval Criminal Investigative Service, interrogated Hamdan and testified to the contents of those interrogations as a witness for the prosecution in the trial, which now sits with the jury. 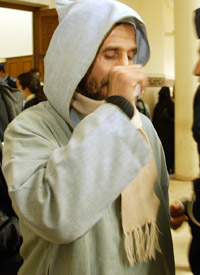 In the course of his testimony St. Ours explained the al-Qaida organizational structure that Hamdan had described to him throughout his interrogations. Atop Osama bin Laden's 30-man security detail was his head bodyguard, Abdellah Tabarak, who had worked for him since 1989.

Tabarak himself claims he volunteered to be captured as part of a plan to allow bin Laden and al-Qaida's top leadership to escape the Tora Bora cave complex in eastern Afghanistan. While bin Laden and his cohort escaped in one direction, Tabarak took bin Laden's assumedly traced satellite phone and ran in the opposite direction, making continuous phone calls until he was finally captured.

Despite this, St. Ours was told on cross-examination, Tabarak was now a free man. According to the Miami Herald's Carol Rosenberg, he "looked stunned."

Tabarak was transferred to Morocco in August 2004 along with four fellow nationals. (Morocco's state news agency claimed shortly after that there were no Moroccans left in Guantanamo.) The five were only briefly in jail in Morocco, and were eventually acquitted by an appeals judge in January 2007.

It’s not clear why the U.S. decided to release Tabarak. The Washington Postreported in 2006 that "Moroccan officials had pressed the U.S. military for many months to hand over Tabarak, arguing that they would have a better chance of persuading him to reveal secrets about al Qaeda."

The fate of the Moroccan inmates raises the larger question of what factors play a role in determining which Gitmo detainees get released, brought to trial or detained indefinitely.

At one point, the U.S. considered Tabarak quite important. When the Red Cross sent a delegation to Guantanamo in October 2003, they were allowed to visit all detainees save four, who were off-limits "because of military necessity." Tabarak was one of those four. When the Red Cross returned in February 2004, they had been cleared to see every prisoner in the camp except for one: Tabarak. His role as a leader in the camp led him to be known at the time as the "Emir of Guantanamo." And yet, six months later he was gone.

While Tabarak was released despite signs that the military considered him an important prisoner, there are others who have been cleared to leave but still remain in detention. (Some countries, such as Yemen -- where nearly a hundred of the remaining detainees are from -- refuse to agree to U.S. conditions for repatriated detainees. Others, such as China, want their prisoners back, but the U.S. says it will not repatriate prisoners who are in danger of being tortured.)

What happens to those who are repatriated, such as Tabarak, is often quite opaque. The Department of Defense, for example, claims that at least 10 former Guantanamo inmates have returned to the battlefield to fight against the U.S., but it has released few details in support of the allegations. If it is in fact true, it would raise the same question as Tabarak's case: what factors led to their release in the first place?

According to Eugene Fidell, president of the National Institute of Military Justice and a lecturer in military law at Yale Law School, the question of who gets to leave Guantanamo and what happens to them once they're gone is "one of the great stories here. It's like Rosencrantz and Guildenstern meet Guantanamo -- what happened to the ones that left?"