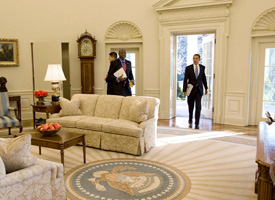 More than half of now-President Barack Obama's cabinet nominees have been confirmed by the Senate today -- but that leaves several holes, raising the question of who is in charge.

Most of those positions are expected to be filled shortly, but some confirmation processes could drag on. Republican senators have delayed confirmation of attorney general nominee Eric Holder by at least a week, and at the Commerce Department, which presently even lacks a nominee, it could be months before an Obama appointee is confirmed.

Can Obama's appointees take office before they are confirmed by the Senate? Are the Bush cabinet secretaries still in office? (Awkward!)

Actually, neither. The incoming administration has the power to designate acting heads of the various departments until the confirmation process is complete. Usually those acting secretaries are long-term civil servants, but they can also be lower-level appointees of the old or new administration.

The Constitution calls upon the president to make appointments and for the Senate to "advise and consent." Not surprisingly, the executive and legislative branches have had a history of tiffs over what precisely "advising and consenting" means.

In 1867, Congress granted itself the authority not only to confirm appointments but to approve firings. When President Andrew Johnson tried to axe Secretary of War Edwin Stanton, he found himself impeached. The impeachment was defeated by a one-vote margin, and Johnson was allowed to continue his march to mediocrity. The law was repealed in 1887.

More recently, critics in Congress objected to Bill Clinton's liberal interpretation of his powers to appoint acting officials -- the high number and long tenure of many acting appointees at various levels of federal government made some feel he was trying to circumvent the confirmation process.

So in 1998, the Republican-dominated Congress passed the Federal Vacancies Reform Act, which strictly limits who can be an acting cabinet secretary and for how long.

So, generally, the new administration finds someone else.

The law limits the possibilities to upper-level officials at the department in question, and -- for vacancies that occur during a presidential transition -- caps their tenure at 300 days. (The president also has the right, enshrined in the Constitution, to make appointments when the Senate is in recess. The appointments must then be confirmed by the end of the next Senate term, which in practice can be as long as a year. If the Senate does not approve the acting appointee, the post becomes vacant again.)

Frequently, the acting position falls to civil servants at their respective departments, non-partisan types who have toiled for years or decades in relative obscurity. William Burns, acting secretary of state until Hillary Clinton took over, is a career Foreign Service officer. Otto Wolf, acting secretary of commerce, was chief financial officer of the department under the Bush administration.

Once an official replacement is confirmed, these noble civil servants gracefully disappear back into the bureaucracy awaiting another moment in the sun.

Sometimes political appointees of the past administration are chosen, an approach that seems to be favored by the Obama administration. Stuart Levey, acting treasury secretary, and Charles Johnson, acting health and human services secretary, are Bush appointees.

A topical historical example: Holder, Obama’s nominee for attorney general, held the post on an interim basis at the beginning of the Bush administration during the bruising confirmation process of John Ashcroft. (Holder's most well-known act, however, the pardon of fugitive financier Marc Rich, took place while he was still deputy attorney general under Janet Reno.)

Other times, the new administration will bring in one of their own, though the legality of this is somewhat murkier. Unlike cabinet positions, many upper-level jobs at the various departments do not require Senate confirmation, so the new administration can appoint a new person to such a job and then designate him or her the new acting cabinet member.

Even more unusual, but not unheard of, is the Robert Gates approach, where the cabinet member of a former administration gets held over.

In many cases, the point is fairly moot. Many of the functions of government -- Social Security check printing, census data tabulation -- exist outside the realm of politics and carry on easily for a day or two until the new cabinet secretary is confirmed.

Sometimes, it is much longer than a day or two. Janet Reno was Bill Clinton's third nominee for attorney general and did not take office until nearly two months into his administration.

The temporary heads technically enjoy full powers, but traditionally major decisions are frowned upon. They still answer to the White House, and when difficult situations arise during a transition (the Iran Hostage Crisis at the end of the Carter administration comes to mind), presidential staffers are calling the shots.