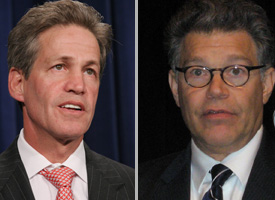 Unlike many states, Minnesota has a solid idea of how well its machines scan ballots because it randomly audits samples of votes. One test found only one error out of 12,000 ballots. Another turned up as many as 53 "discrepancies" -- between a machine's and a human's read -- out of 94,000.

That's impressively accurate for voting machines. But it's not precise enough to predict who'll triumph in the U.S. Senate race between Republican Sen. Norm Coleman and Democrat Al Franken. They're currently separated by 206 votes out of 2.9 million cast.

Coleman's unofficial lead amounts to .007 percent of the vote, easily triggering Minnesota's required recount of any race closer than .5 percent.

In a few days, election workers will begin scrutinizing every single ballot cast in the race. Minnesota uses optical scan ballots -- fill in the bubble -- so hanging chads are not an issue.

The outcome has national stakes, as a Franken victory would move Democrats closer to a 60-vote super-majority in the Senate.

For those interested in election reform, the recount promises added drama. The pros know that no voting system designed, used and overseen by humans can be perfect. Voters may not follow directions. Machines can misread stray marks or just break. Workers typing up machine results can leave off the "1" in "124" (that mistake got caught last week in Minnesota).

Minnesota, however, has gotten unusually high marks from experts for its record of election oversight. That record, nonpartisan watchdogs say, stems largely from practices that other states could import. The recount will test how well Minnesota's procedures hold up under the closest scrutiny.

Election Systems & Software, the main provider of Minnesota's bubble-sheet scanners, has faced criticism for a reported maintenance problem in Michigan. But Secretary of State Mark Ritchie, a Democrat, said Minnesota did not have such problems. "We test and retest. All our machines are always under review," he said.

Mark Halvorson, director of the nonpartisan Citizens for Election Integrity Minnesota (CEIMN), agreed that the technology has been impressively accurate. He can say so because unlike many other states, Minnesota since 2006 has required post-election audits. These audits test, by manual recount, the accuracy of machines in a randomly selected three-percent sample of votes in statewide elections.

This year's selective audit is currently under way. Halvorson said he relished the coincidence of a full statewide recount -- essentially, an audit with a 100-percent sample size.

"I love it," he said, because it will show how close the selective audits get to capturing overall error rates.

Lawrence Norden, national voting technology expert at the Brennan Center for Justice, said that manual recounts are a good idea in razor-thin contests. Even the best machines "might read stray marks as an overvote" -- two votes for one office -- or not read bubbles filled in with the wrong ink. "When it's this close, voters' intent becomes very important," he said.

"We're not talking about improper activity," Republican National Committee member Brian Sullivan told the Minneapolis Star Tribune last week. "Just ballots where votes may not have been recorded if they weren't properly marked."

Gaps between intent and what a machine is able to read -- for instance, voters have been known to circle a bubble rather than fill it in -- could show the need for the state to provide clearer directions, said Norden.

In the recount, local election workers will review each paper ballot to verify the voter's intent. The campaigns and general public are welcome to observe, and the state has posted online the standards for determining intent. Halvorson said CEIMN is training volunteers to monitor parts of the recount.

This recount would be the largest in state history and is expected to take as long as a month. Any disputed ballots will go to a central state canvassing board of judges, appointed and overseen by the secretary of state, for final decision.

For this recount, Ritchie has appointed at least two known Republicans, prompting Coleman's lawyer to tell the Associated Press that "the people of this state should feel good about who's on the panel."

Criticism of the state has been bipartisan. Last Friday, ahead by more than the current 206 votes, Coleman's campaign asked whether the vote-tallying process was "tainted." It sued Saturday to block the counting of 32 absentee ballots, again questioning the state's conduct, but lost. Yesterday Franken's campaign sued for access to rejected absentee ballots, saying qualified voters might have been excluded.

Ritchie told ProPublica that he welcomed the attention. "We have a chance to show the country how you do these things right and reverse the bad image election administrators got out of Florida [in 2000]," he said.

As a matter of principle, the presiding official's party affiliation can't be ignored, said Edward Foley, director of election law at Moritz College of Law. "[Ritchie] may be a good-government type and well-meaning, but by definition he is a member of one of the two teams with an interest."

But he said Minnesota's political culture tempers his worry that election officials will act as partisans. Minnesotans elected independent Jesse Ventura governor in 1998, and some 15 percent of them picked neither major-party candidate in this Senate race. That they're not clearly moved by mere party loyalty, he said, should give pause to anyone inclined to tilt an election result for their party.

Foley's colleague, Nathan Cemenska -- a lawyer who prefers to be called "the web editor of Election Law @ Moritz," a nonpartisan national clearinghouse on its title subject -- says a similar nonpartisan culture characterizes the state’s bench, which would decide any post-recount legal contest.

A candidate unsatisfied with a recount result or wanting to claim problems -- such as bribery or polling-place harassment -- that go beyond ballot interpretation, may file a legal challenge. The state Supreme Court's chief justice, currently a Republican, would appoint a panel of three judges to hear the case.

Although the judges are elected, Cemenska said, "Minnesota has the best judiciary in the country. They run on a nonpartisan ballot. They have a tradition of not talking about party affiliation. I tried and couldn't figure it out without ambiguity."

Without a known advantage, he said, litigating election results could be risky. Voters called to testify about their intended choice, for instance, may have changed their minds since Election Day. He compared the uncertainty to physics's Heisenberg principle: "When you're determining the position of an electron relative to a neutron, the mere act of trying to determine its position changes its position. That's how it is with this election stuff."