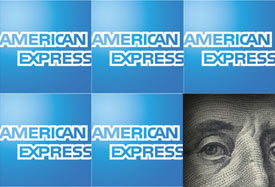 This morning, Treasury Secretary Henry Paulson announced that the bailout may be expanded to include credit card companies and auto and student loan companies. But American Express isn’t taking any chances. On Monday, AmEx became the latest business to turn itself into a bank holding company, thus making it eligible for the TARP and other emergency loan programs recently set up by the Federal Reserve.

"It makes absolute sense in the current economic environment to be in a position to be able to take advantage of the government-sponsored programs and be on equal footing with others in the industry," AmEx spokeswoman Joanna Lambert told us after Paulson’s announcement this morning. "It’s what we believe to be the right thing to do."

Becoming a bank means that AmEx must jump through extra regulatory hoops in exchange for further protection, which also includes federal deposit insurance, access to the Fed discount window and an array of new Fed lending facilities for banks. While the company has said that it will not change its core business strategy, it may bulk up its small banking operations, said Red Gillen, senior analyst for Celent, a financial research group. It is betting that the payout in the short term will be worth the cost.

The company is following in the footsteps of Morgan Stanley and Goldman Sachs, the investment banks that turned themselves into bank holding companies with the Fed’s blessing in September.

With the feds continuing to broaden the scope of the bailout, will companies still have a motivation to become banks?

"They will be thinking about it," said Richard Sylla, professor of economics at New York University’s Stern School of Business. Becoming a bank still gives companies access to a large potential pool of federal funding. "The question is, how easy will the Fed make it for them?"

"Bank holding company" has generally referred only to those companies whose primary operations were closely related to commercial banking. Including credit card companies and investment banks in that regulatory scheme may be a mistake, some observers say.

Bank holding companies are restricted in the amount of debt such a company can take on, and there are added regulations on certain kinds of risky transactions. Investment banks, especially, are accustomed to making big bets with borrowed money and keeping little capital on hand. Becoming a bank holding company means forgoing those bets.

"On principle it’s a big deal that they will be regulated as commercial banks," said Dean Baker, co-director of the Center for Economic and Policy Research, a Washington, D.C., think tank. "Over the longer term, I don’t know if they’ve thought it through and if the Fed has thought it through."

It’s unclear how strictly these banking regulations will be enforced over the short term. Since the financial crisis began, the Fed has temporarily relaxed certain capital requirements for bank holding companies and eased regulation restricting the kinds of transactions they can make with their affiliates.

The Fed has said that the companies have two years to comply with the stricter regulations on bank holding companies, and it will allow extensions of a year at a time.

And some of the companies may hope that the federal regulations will apply to only the commercial banking operations of their company, and not the rest, said Baker.

So much is unclear that there is a potential for painful clarifications down the road, said Baker. "I think it would be unfortunate if you threw them a lifeline and said, 'We’ll let you keep 90 percent of your operation out of our control.'"

Taxpayers may be unhappy to bear the risk of companies accustomed to betting the farm on strategies that may or may not pan out. And even if they do submit to the stricter regulations, can corporations that profit from taking big risks be trusted to play it straight?

"Can we be assured that they will follow the rules strictly? These are strong competitors who take advantage of loopholes" says Gary Dymski, an economics professor at the University of California, referring to Morgan Stanley and Goldman Sachs. Companies may approach risk cautiously during the current economic crisis, he says. "But how is it going to be ten years from now?"

Lambert said that AmEx intended to comply with all federal requirements.