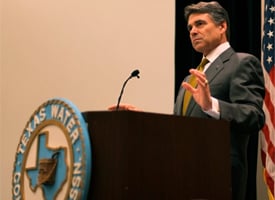 Texas Gov. Rick Perry officially rejected money from the stimulus bill when he turned away $550 million that would have expanded unemployment insurance benefits.

As we have pointed out in the past, this is interesting, given that in Texas only one in five unemployed workers receives benefits -- a percentage that earns the state the rank of 49th out of 51 jurisdictions. The federal funding would pay for benefits for 45,000 Texans who otherwise would not qualify.

Perry and other governors who also have threatened to refuse the unemployment insurance funding say the bill would force them to raise taxes on businesses to sustain the expanded benefits in two years, when the federal money runs out.

That part could be true. States have to change their laws to qualify for the money. And despite claims to the contrary, even by some members of Congress, the bill's language prohibits a sunset provision. In other words, you can't write a law that specifically expires as soon as the federal money runs out.

There would, however, be nothing -- other than public opinion and political will -- preventing states from scaling eligibility back down.

But what are the changes in the bill? Are they so vile that they should be reversed as soon as the recession ends?

Here is a guide to the provisions (PDF):

While some states are rejecting funding, other states are embracing the stimulus package. Iowa became the first state to pass a law qualifying it for the extra money. As a result, $70 million in federal funds will soon be deposited in Iowa's unemployment insurance fund.