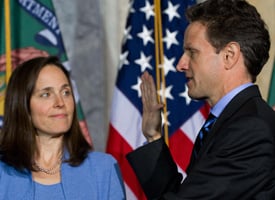 Newly confirmed Treasury Secretary Tim Geithner is on the job today. And his first act is to announce new rules to limit lobbyists' contacts with regulatory officials doling out the bailout bucks. According to the announcement, the rules will also seek to curb "political influence."

The details on the new proposal have yet to be rolled out, but it comes in response to a slew of articles demonstrating the pressures on Treasury Department officials and other regulators from lawmakers and lobbyists. The Wall Street Journal reported last week that a number of Democratic lawmakers, including House Financial Services Committee Chair Barney Frank (D-MA), had petitioned regulators on behalf of constituent banks.

While we'll have to wait and see just how far-reaching the new rules will be, Geithner seems aware that there's a more direct way to curb those pressures: conduct the bailout with greater transparency. Also included in the announcement are promises to make the process "transparent and based on objective criteria."

As we pointed out months ago when the bailout was first getting underway, Treasury has so far decided which banks should get a piece of the pie based on private, undisclosed criteria. Treasury officials publicly proclaimed that the Capital Purchase Program (the $250 billion portion of the TARP allocated for banks) is for "healthy banks," a description that seems to have been purposefully ambiguous.

Not surprisingly, a number of participants seem less than healthy. Two of the first participants in the program, Bank of America and Citigroup, have returned to collect a total of $40 billion in additional investments. One ailing bank in Hawaii had been told by regulators that it must raise extra capital -- but that extra capital ended up coming from the Treasury Department. And as the Journal showed, one minority-owned Boston-area bank got special treatment because Rep. Frank had inserted language in the bailout bill to make sure it got a piece of the TARP.

Just to muddy matters more, the number of TARP programs (yes, that's programs within the Troubled Assset Relief Program) proliferated. Rather than going to banks that were supposedly "healthy," these programs were straight-up bailouts. AIG, General Motors, Chrysler and GMAC all got special help.

And then there are the double-dippers. Citigroup, for instance, received $25 billion from the Capital Purchase Program (back in October, when it was deemed healthy) and $20 billion more from the Targeted Investment Program, a program created to prop up faltering giant financial institutions (Bank of America is the other participant). The money all comes from the same place, the Treasury Department, but it was treated differently, with some absurd results. As we reported, Citigroup agreed to track how it spent the $20 billion investment (under the Targeted Investment Program), but not the first $25 billion (under the Capital Purchase Program).

The resulting muddle has been confusing not just to the public, but also to banks. Add to that the fact that the Treasury Department has been overwhelmed by applications from thousands of banks, creating a huge backlog, and you have a situation where banks have felt compelled to turn to alternate channels. As the chief exec of Independent Community Bankers of America told the Washington Post, "I think there is a suspicion among a large number of our members that it's who you know rather than the merits of the application."

Geithner promises a couple of things in his announcement this morning to curb that frustration: The Treasury "will publish a detailed description of the investment review process" and beef up the department's resources to review bank applications.

Only time will tell whether those measures will work. For one thing, we'll have to see the details to know how this Treasury's review process differs from the less-than-fulsome process the prior administration had.