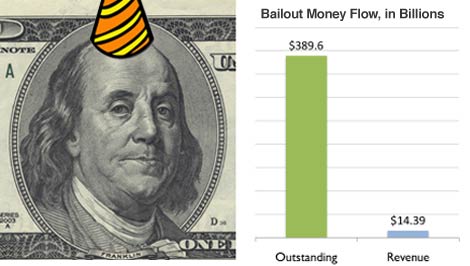 This Saturday, the $700 billion TARP will be a year old. What better way to celebrate than with our monthly update on the bailout?

Our database, of course, tracks not only the TARP but also the bailout of Fannie Mae and Freddie Mac, which itself had its first birthday on Sept. 7.

In total, $389.6 billion remains outstanding to 655 recipients ($294 billion under the TARP and $95.6 billion that’s gone to Fannie and Freddie). That total doesn’t include the 39 companies that have returned a total of $71.9 billion.

Last month, we told you that there was $393 billion outstanding. The reduction is mainly due to an adjustment to the cost of the Chrysler bailout. The Congressional Oversight Panel’s report on the auto bailout showed that the Treasury has actually loaned Chrysler about $10.47 billion, not $15.2 billion, as Treasury initially reported. Chrysler ended up not needing that much.

Money continues to flow out. In September, the Treasury invested $141 million in 14 banks (see our timeline for more details).

Meanwhile, dollars are just beginning to flow for one major program: the government’s mortgage modification program. The Treasury has set aside $22.3 billion for 60 different servicers, but since funds are not released until homeowners have completed a three-month trial modification, only about $276,000 had been paid out as of last week.

AIG also continues to draw on a line of credit. Taxpayers have pumped $43.2 billion into AIG as of September, a number about $1.7 billion higher than last month. Treasury has agreed to provide AIG up to $69.8 billion total. (Here’s our full rundown on the AIG bailout.)

That’s the expense side of the ledger. How about the revenue side?

The TARP has two main sources of revenue: quarterly dividend or interest payments and warrant redemptions. Unlike returned money, which can be used again, the Treasury is obligated to use revenue to pay down the national debt.

So far, the Treasury, through refunded TARP investments, has collected $2.9 billion in exchange for its warrants. The stock warrants, which give the U.S. the right to buy equity in the companies at a set price, came as a condition of the investments. When companies refund the Treasury’s money, the warrants are either sold back to the company or auctioned off.

Put all that together (the dividend and interest payments along with the stock warrants), and you get a total of $14.39 billion in revenue.

The two sides of the ledger don’t quite balance out yet, to be sure. Testifying last week, the special inspector general for the TARP said you shouldn’t hold your breath until it does. It’s "extremely unlikely"  that the TARP will result in a profit for the taxpayer, he testified, a statement that doesn’t even account for the nearly $100 billion invested in Fannie and Freddie.