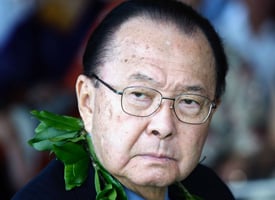 Earlier this month, we noted that defense contractor Mitchell Wade, a key figure in the Rep. Randy "Duke" Cunningham scandal, gave authorities what his lawyers claimed were tips on five other members of Congress.

As we detailed, four of the five lawmakers did have at least some connection to the Cunningham scandal. But there is no evidence any of them committed any crimes. And all four had publicly denied wrongdoing.

The fifth lawmaker cited was Sen. Daniel Inouye (D-HI). He had never before been named in connection to the Cunningham scandal. So we tried, unsuccessfully, to contact Inouye.

Yesterday, his office got back to us.

"Senator Inouye has not been contacted by the FBI or any other investigative authority in connection with the cases involving Duke Cunningham, (co-conspirator and defense contractor) Brent Wilkes and Mitchell Wade," Inouye Press Secretary Mike Yuen told us. "Speculation and suggestions that a cloud of wrongdoing hangs over him and that he engaged in similar misconduct have no basis in fact."

Yuen said he had been "out of pocket" when we made our inquiries earlier this month and had only now returned to the office.

Meanwhile, this week Wade was sentenced to two-and-a-half years in prison and fined $250,000. He pleaded guilty three years ago to bribing Cunningham with more than $2.4 million and making illegal campaign contributions to two other lawmakers.