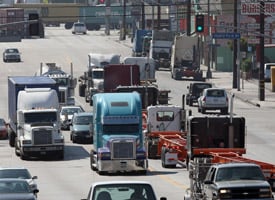 Just how many hours truckers can drive before they become a safety risk has been a running battle under President Bush's watch. Now in its waning days, the administration has tried to settle the issue one last time by finalizing the same rule the courts have already rejected twice.

Will the third time be the charm?

The rule, drafted by the Federal Motor Carrier Safety Administration, allows truckers to work up to 14 consecutive hours a day, including 11 behind the wheel. It also would limit total work hours in a week.

Critics say the administration's rule falls short of what's needed to protect the public. Large-truck accidents killed 4,808 people last year, and most of the victims -- about 80 percent -- were not in the trucks.

"There are plenty of good studies that show crash risk increases after 8 to 10 hours of driving," said Anne McCartt, senior vice president of research at the Insurance Institute for Highway Safety.

But the administration says that reverting to the old regulation -- which limited driving to 10 hours daily -- would cost the trucking industry $2.4 billion a year. And backers say the rule is at least as safe. Despite legal challenges, it has been in effect since the administration first adopted it in 2004.

"The agency's data and safety analysis makes clear that this rule will continue to maintain highway safety by ensuring that drivers are rested and ready to work while continuing to provide operational flexibility to the industry," John Hill, the motor carrier's administrator, said last month during a press conference.

Hill noted the number of large truck fatalities had declined since the rule change, and that there was only one fatigue-related fatality in the 11th hour between 2004 and 2006. The rule allows for more rest time, he said, and attempts to keep truckers on a more normal sleep schedule to reduce fatigue.

The ATA backs the administration's rule. The industry group says injuries and fatalities from truck-related accidents have declined despite a steady rise in the number of trucks. On the other side are several public interest groups, as well as the International Brotherhood of Teamsters, which have spoken out against all or portions of the rule. Owner-Operator Independent Drivers Association and Public Citizen have both fought the rule in court, though on different grounds.

In a 2004 challenge by Public Citizen, the court found a lack of scientific support for increasing driving hours, noting that the government's own studies showed a decline in driving performance after eight hours.

Conflicting science has added to the debate, in part because of problems measuring fatigue and contributing factors, such as time of day a person sleeps versus the tasks a person does while awake.

A 2005 study by Penn State found an increase in risk beyond five hours at the wheel; by the 11th hour, the risk was three times as high as the first hour.

Researchers at the Virginia Tech Transportation Institute found a spike in critical incidents between the first and second hours of driving but no significant increase in crash risk between hours two and 11.

Both studies received funding from the government.

Michael Belzer, a former long-haul trucker who is now an economics professor at Wayne State University, said an extensive study is needed to resolve inconsistent findings and consider variables such as non-driving duties, the health of truck drivers, pay and the cumulative effect of fatigue.

A study led by McCartt highlighted another complicating factor: compliance. The research, which focused on truckers in Pennsylvania and Oregon, found that 25 percent to 32 percent of truckers reported working longer than legally allowed in the prior month. The percent of driver logbooks deemed "generally accurate" ranged from 32 percent to 39 percent.

Leroy Berry, an owner-operator who's been driving for 25 years, said he works close to 75 to 80 hours in a seven-day period and may run 15 to 18 hours a day. "You learn how to lie," Berry said, "and to make the log book look like it needs to."

Opponents of the rule say it has backfired in some respects.

Joe Rajkovacz, regulatory affairs specialist for Owner-Operator Independent Drivers Association and a former long-haul trucker, does not take issue with the extra driving hour, but rather with having to work consecutively the allowable 14 hours a day. This provision, he says, creates a disincentive to stop and take a short rest.

The clock never stops, he said.

Under the old rule, truck drivers could work 15 hours a day, but operators could go off duty without it counting toward their daily limit.

The new rule also includes a stipulation allowing truckers to reset the clock during the week if they rest for a 34-hour period.

Truck drivers and the industry like the reset provision because it means operators can work more than the 60-hour per week cap when they need to. But safety advocates say it means, in theory, drivers could legally work 84 hours in a week, though the number of drivers capitalizing on this provision is still relatively low.

"It's just too much," said John Lannen, executive director of the Truck Safety Coalition, a grassroots group that aims to cut truck accidents and casualties. "It's not just the (extra) 11th hour; it's the cumulative effect of driving that much day in day out and week in week out."

Public Citizen, Advocates for Highway and Auto Safety and the International Brotherhood of Teamsters are exploring their options for how to fight the Bush rule.

Others, such as the Truck Safety Coalition, are waiting to see whether the Obama administration will try to overhaul it. With the regulation now finalized, it would mean starting the prolonged rulemaking process from scratch.

You can see a rundown of this rule and others ProPublica is tracking on our Midnight Regulation chart.