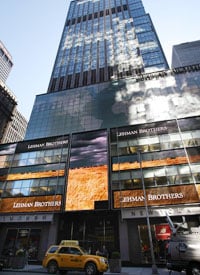 The federal government has already made two major interventions in the subprime crisis. And as Lehman Brothers' shares have continued to precipitously decline throughout the week, many have wondered whether Uncle Sam will again ride to the rescue.

The answer, according to today's Washington Post: not exactly. Federal officials are involved in helping to broker a sale, but the "government is looking for an agreement that would not involve public money."

When Bear Stearns was tanking last March, the Federal Reserve stepped in to provide JPMorgan Chase a $30 billion credit line to help it buy the firm. The government doesn't want to do that this time around, the Post reports, in part because Lehman's failure isn't seen as posing as much of a risk to world financial markets. Also, the Fed, "which has faced criticism for its efforts to rescue large financial firms, does not want the markets to view it as an endless source of bailouts."

Judging from coverage of the Freddie Mac and Fannie Mae intervention, there has not been much of an outcry about the federal government's newly assertive role. Sure, there have been complaints about the way it was handled: Freddie Mac shareholders say that confident statements from government officials misled them about the company's future and Democrats have criticized the severance packages for the departing Fannie and Freddie execs. But the focus on Capitol Hill has largely been on why federal officials aren't doing more. When Federal Reserve Chairman Ben Bernanke testified before a congressional panel in April, Dems wanted to know why the Fed was helping Wall Street, but not struggling homeowners.

The new era of government intervention is just beginning, it seems. Lawmakers are enthusiastic about $25 billion in low-cost loans for the auto industry; Detroit hopes to win as much as $50 billion over three years. And while the federal government has a long history of intervention, the subprime crisis has already claimed a prominent place in that history. The last comparable flare-up, the S&L crisis of the late 1980s, ultimately cost taxpayers roughly $124 billion.

This crisis has yet to begin to approach that mark, and it's far too early to put a price tag on it anyway. But it's a clear reminder, as one expert put it, "If anybody thought we had a pure free-market financial system, they should think again."