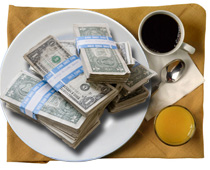 Tomorrow is stress-test day, when we'll learn whether regulators think the nation's biggest banks could survive a severe recession, and if not, how much more of a capital cushion they need. With each day, more details have trickled out, and today, the big story is Bank of America and its $34 billion gap.

That's considerably more than earlier whispers had indicated, but that doesn't necessarily mean additional bailout money is heading BoA's way (it's gotten $52.5 billion in aid so far). The bank will do its best to raise that money privately. If it can't -- and that's a whole lot of money -- then the most likely outcome is that BoA will convert the government's preferred shares to common stock. The preferred shares are not publicly traded and resemble bonds in that they pay an annual fixed dividend. If those were converted to common stock, the government would end up being a significant stakeholder in BoA, just as it is with Citigroup. (BoA's current stock-market value is about $70 billion.)

And as for Citigroup? Well, because the bank has been active selling off subsidiaries and the Treasury already is in the process of converting $25 billion of its holdings to common stock, Citi reportedly will be required to raise much less capital -- below $10 billion.

In other big bailout news, the Treasury is reportedly set to release new requirements for banks returning their TARP money. The big requirement: banks won't be allowed to return the money if they're still using an FDIC program to guarantee debt issuances. They'll have to show they can raise money in the market without government help. We'll have more on that when the Treasury releases the official guidelines.