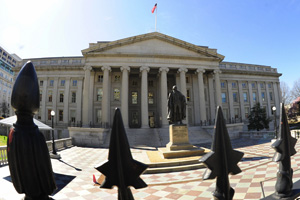 A growing number of small and midsize banks that received federal bailout money have stopped paying quarterly dividends to the government in order to conserve capital.

The banks, reeling from bad loans, have sometimes been ordered by regulators to stop the payments as part of a rescue plan.

At least 18 banks that received bailout funds are not paying dividends. They range in size from San Francisco-based UCBH Holdings, which received $299 million in taxpayer money and recently announced suspension of the government dividends as part of an "action plan" to strengthen the bank, to tiny community banks. Some have chosen to suspend dividends, while others have been prohibited from paying them by regulators. (See the full list below.)

The banks aren't paying dividends only months after being blessed by regulators and the Treasury Department as "healthy." The money was distributed through the government's primary bailout program. As then-Treasury Secretary Hank Paulson explained last October, the program was aimed at boosting the overall economy by investing in banks that "will deploy, not hoard, their capital."

The Treasury has kept secret its criteria for accepting banks, saying only that those approved should prove themselves viable without the government investment. Banks in the program are selected for their ability to keep lending levels up, Treasury officials have said, and keep taxpayer risk at a minimum.

Yet shortly after receiving funds, two of the biggest recipients, Bank of America and Citigroup, which both received $25 billion through the program, were bailedout with even more taxpayer money. More recently, CIT Group, which received $2.3 billion late last year, has flirted with bankruptcy.

The suspension of TARP dividends shows that some smaller banks in the program are struggling, too. It also calls into question whether all of the banks in the program really could have survived without the government investment. In the government's haste to boost the banking sector, "there may have been decisions, where had there been more time and analysis, may have been made differently," said Karen Dorway, president of BauerFinancial, a research firm that studies the financial health of banks. The Treasury Department declined to comment on the dividend suspensions.

Regulators have intervened with a number of the troubled banks.

California-based Pacific Capital Bancorp, which received $180.6 million, reached an agreement with its primary regulator in April to hatch a new plan to deal with its problem loans and boost its capital levels. The bank, which announced its intention earlier this year to lay off nearly a quarter of its employees, missed a dividend payment to the Treasury soon thereafter.

In Wisconsin, Anchor Bancorp received $110 million from the Treasury in January. In June, regulators issued a cease-and-desist order requiring the bank to raise its capital levels and putting it under strict supervision. The bank has yet to make a dividend payment to the Treasury.

The problems extend to small community banks such as Pacific Coast National Bancorp of San Clemente, Calif. The bank received $4.1 million in January, but regulators later clamped down, forbidding it to increase its loans above the amount on the bank's balance sheet and ordering it to raise capital. The bank was in dire straits when it received the bailout funds in January, "significantly undercapitalized" under regulatory guidelines. But as a result of the aid, it ascended to merely "undercapitalized," according to its annual report. It is prohibited by state regulations from paying dividends.

Blue Valley Ban Corp of Kansas ($21.8 million) suspended dividend payments in May at the request of its regulator, said the bank's CEO, Bob Regnier. But he said the move was only cautionary as the bank deals with losses from construction loans and doesn't mean the bank is pulling back on lending. "We're still out there making every good loan that we can find, but it's a more difficult economic environment."

One bank is seeking even more TARP funds. Midwest Banc Holdings ($84.8 million) suspended dividends in May to retain cash and announced this week that, as part of a plan to reduce costs and raise capital, it was seeking up to $53 million more from the Treasury.

The Treasury has invested more than $200 billion in 653 companies through the program, and since the overwhelming majority of banks have paid dividends, the Treasury had collected $6.7 billion as of June, according to a Treasury report (PDF). The banks pay 5 percent annual interest on the investment.

There is a consequence for banks missing too many dividend payments. After six quarterly non-payments, the Treasury gains the right to appoint two members to the bank's board of directors, a fate some banks could face next year.

At least eight California banks have missed dividend payments because of state laws prohibiting payment of dividends unless certain earnings benchmarks are met. The rules are designed to ensure that banks pay dividends out of earnings, something that's more difficult for younger banks.

Fresno First Bank, a 3-year-old community bank, is among those eight, but Chief Financial Officer Steve Canfield said the bank expects to gain approval from state regulators to pay the dividends on the $2 million investment later this summer. The bank plans to use the TARP money primarily to fund the bank's "very, very rapid" growth, he said. "It wasn't our intention to take the money and stiff the government."