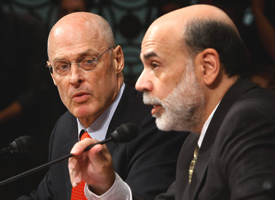 As we noted this morning, a big question mark remains on the administration's bailout proposal: how much the government will pay for the distressed assets.

At the hearing before the Senate banking committee today, Fed Chairman Ben Bernanke and Treasury Secretary Hank Paulson have said that they don't yet know how they will value the assets, except to say that they will use "market-driven mechanisms as much as possible" and many experts will be consulted. But in his opening remarks, Bernanke did provide some clarity. The point of the intervention, he said, is for the government to step in and buy the assets above the "fire sale" prices they would fetch if sold today.

The government is planning to buy these securities at the "hold-to-maturity" price, he explained, which would "give the market good information about what the hold-to-maturity price is." Buying at that price, he added, would "minimize" taxpayer risk -- presumably meaning that the government would not be buying at too high a price to recoup the investment along down the line.

When lawmakers tried to nail Bernanke and Paulson down further on this, they were unsuccessful. "What's clear is that there's going to be a substantial amount of recovery," Bernanke said. "Whether the full amount is hard to know."

Paulson preferred to emphasize the cost to the taxpayer of not acting: "There's less risk in this course than not doing it."