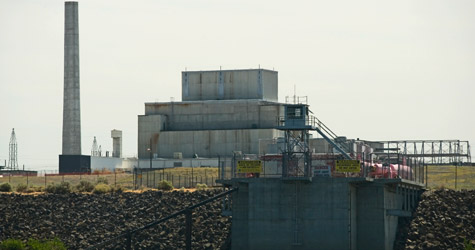 The $2 billion in federal stimulus money came as blessedly as rain to the desert of southeastern Washington state, where the government has spent decades trying to clean up the most productive A-bomb factory of the Cold War era. Phones at the Hanford Nuclear Reservation rang off the hook with calls from people in the nearby metropolitan area of Kennewick, Pasco and Richland who hoped to land one of 4,000 new stimulus jobs -- on top of 11,000 already working at Hanford. Robert Valdez, 33, a father of two young children who was among the early hires, said the starting pay of $17 an hour plus benefits was "life changing." So were the nine weeks of intensive training he underwent to prepare for the hazards of working around a stew of poisonous chemicals and menacing pockets of radiation.

The money for Hanford, part of a $6 billion infusion at nuclear cleanup sites run by the Department of Energy, seems in perfect sync with goals of the stimulus plan -- the much-debated $800 billion package of tax cuts, payments and infrastructure spending that President Barack Obama and Congress approved last year to stanch the bleeding economy. But the twin ambitions of fast jobs and enduring environmental gains are colliding with another goal: worker safety. The crush of new hiring, ProPublica has found, is potentially exposing stimulus workers to beryllium dust, a legacy of the nuclear industry that can cause a debilitating and deadly disease in people who are sensitive to the metal. The risks don't seem to be registering with some workers. Valdez said he received extensive radiation training but spent only four hours on beryllium safety. He left with the impression that beryllium "is in a few buildings, but it's not something to worry about ... I don't think about beryllium on a daily basis."

An Insidious Threat, Hidden From View

But the dangers are real, and they've been compounded by gaps in the government's safety efforts against this elusive threat. Unlike radiation or chemicals, beryllium dust cannot be identified by sight or smell, or tested for in real time. Screening for chronic beryllium disease (CBD) is unreliable, and officials concede they don't know all the places beryllium is hiding at some of the 20 nuclear cleanup sites that received stimulus money, notably Hanford and the Savannah River site in South Carolina, which received $1.6 billion from the stimulus. Though rare, there is no cure for CBD. Cases continue to trickle in despite what the Energy Department and its contractors maintain are huge strides in preventing beryllium exposure.

A new CBD prevention program at the 586-square-mile Hanford site was to be in place Jan. 1. Yet there have been lapses and delays as stimulus hiring proceeds. Months after the deadline, workers say beryllium safety steps are not uniformly implemented. Current and former workers say safety officials downplay the dangers of beryllium and that new workers don't understand the gravity of the risk. One longtime worker said new employees routinely enter areas marked as potential beryllium zones without respirators. Some get no more beryllium training than a few multiple choice questions on a computer safety exam. "If you get an answer wrong," said one worker who has taken the training, "they just take you back and you start clicking through until you get it right." As with other workers who spoke confidentially to ProPublica, the employee requested anonymity to protect his job.

Data kept by AdvanceMed Hanford, the site medical contractor, show that of some 5,000 workers screened at Hanford in the last five years, 128 have either CBD or beryllium "sensitization," meaning they had an allergic-like reaction to beryllium and will likely develop the disease. In CBD, the immune system attacks beryllium in the lungs and forms scarred areas called granulomas. Patients gradually lose their ability to breathe. Five new cases of beryllium sensitization have been reported at Hanford since last summer.

Prompted largely by the concerns of sick former workers and a watchdog group, Heart of America Northwest, a fresh Energy Department inspection of beryllium protection measures at Hanford began in March. According to Craig Hall and Tom Peterson, former Hanford workers with CBD who attended briefings from the inspectors, workers have reported cases of troubling laxity. In one instance, a building door was propped open, obscuring a sign that warned of potential contamination. A group of new workers entered without protective gear, Hall and Peterson said, and emerged covered in dust that might have contained beryllium.

The inspection report is due out this month, but ProPublica obtained copies of letters the DOE Office of Health, Safety and Security has already sent to three Hanford contractors citing actions that must be taken in the next 30 days. Among them: Ensure that workers are being properly trained and monitored for exposure, and cease the unsafe practice of declaring buildings uncontaminated before they've been exhaustively tested for beryllium. 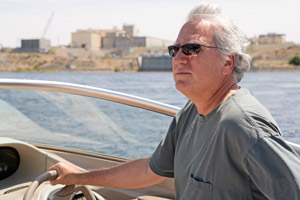 When the government rolled out the stimulus last year, the emphasis was on speed. "These investments will put Americans to work while cleaning up contamination from the Cold War era," said Energy Secretary Steven Chu in announcing where the cleanup money would go. "It reflects our commitment to future generations as well as to help local economies get moving again." But longtime Hanford watchdogs worry that streaming new workers onto the site without adequate safeguards in place is asking for trouble. "It's when they start rushing at Hanford that people get hurt," said Tom Carpenter, head of the nonprofit watchdog group Hanford Challenge and a lawyer for nuclear safety whistleblowers.

The Energy Department declined to answer questions about specific problems with beryllium safety and instead gave a general statement saying the agency provides training and "takes very seriously its commitment to protect the health and safety of employees." Prior to the inspection, several agency officials did discuss with ProPublica the challenges involved in protecting workers from beryllium at Hanford.

Mike Van Dyke, an industrial hygienist at National Jewish Health, considered the country's top respiratory disease hospital, said uncertainties about safe beryllium exposure levels and the difficulty of locating contaminated areas mean more CDB cases are likely. "The thing I would be concerned about," said Van Dyke, "is that you have a large number of workers who are going to be newly exposed to beryllium, and it appears that there is a sub-population of workers that are capable of getting beryllium disease at really low levels."