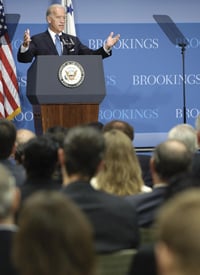 The stimulus is a "silver buckshot," not a "single silver bullet." That's how Vice President Joe Biden described the stimulus in a speech Thursday marking the 200th day since the Recovery Act's passage. The speech was "aimed squarely at Republican criticism and public skepticism over the program's effectiveness," reports the AP. “He tried to dispel the notion that the $787 billion stimulus bill was essentially a giant works program -- which may have taken root when the administration billed it as the biggest investment in infrastructure since the creation of the Interstate Highway System,” reports The New York Times' Prescription Blog. Politico's coverage focused on the moral imperative underlining Biden's speech. Here at ProPublica we reviewed how Biden's statements line up with the administration's earlier promises. You can watch Biden's speech on The Washington Post’s Web site.

Bovis Lend Lease LMB, an international construction management company dealing with an ongoing FBI investigation into accusations that it overbilled and bribed union officials in New York, has been awarded several stimulus contracts, reports The New York Times. The School Construction Authority, a city-state agency in New York, recently suspended the company from bidding on its projects because it failed to disclose the investigation in a bid application. The Times article highlights how difficult it is for local, state and federal authorities to easily share information on contractors under investigation.

Recovery.gov has a new chart displaying the Recovery Act's impact on tax relief.