There have been a number of developments since we reported Tuesday that Congress was considering barring the Internal Revenue Service from offering a free tax preparation service that would compete with products such as TurboTax.

After our story, several freshmen Democratic members of the House said they had not previously understood that the wide-ranging bill, called the Taxpayer First Act, contained such a provision.

Reps. Katie Hill and Katie Porter, Democrats of California, and Alexandria Ocasio-Cortez, Democrat of New York, opposed the provision, but the bill ultimately passed the House on a voice vote Tuesday.

“Senate Republicans fit in some bitter pills and some problematic provisions,” said Hill, who supported the bill as a whole, speaking on the House floor. “One of these is a piece that came to my attention today — which the corporate tax lobby has spent years and millions of dollars to get — which would bar the IRS from creating a simple, free filing system that would compete with their own.”

One of the sponsors of the bill, Rep. John Lewis, D-Ga., told his wavering colleagues that other aspects of the bill, especially restrictions on private debt collection of unpaid taxes, justified supporting the legislation.

As a result of the objections, members of Congress will create a “working group” to study the IRS’ deal with the tax software industry, The Washington Post reported. That could result in separate legislation addressing the issue, a Democratic Hill staffer told ProPublica. The industry trade group, as well as Intuit and H&R Block, did not immediately respond to requests for comment.

The fate of the Taxpayer First Act is now in the hands of the Senate, where a companion bill was introduced by Sens. Chuck Grassley, R-Iowa, and Ron Wyden, D-Ore.

Following publication of our story, Grassley and Wyden disputed that the bill would permanently bar the IRS from creating its own product to compete with the commercial tax preparation industry. Grassley said in a statement that the purpose of the provision was merely to put Congress’ “support into statute.”

But outside experts say that the Taxpayer First Act’s provision codifying the IRS noncompete agreement with the private industry would tie the agency’s hands.

Jeremy Bearer-Friend, a tax expert at NYU School of Law, said the provision in the Taxpayer First Act “is designed to limit IRS discretion. The whole point is to force the IRS to stay in Free File.” Bearer-Friend added that the IRS “would face substantial litigation risk if they tried to terminate Free File after this becomes law.”

Congress Is About to Ban the Government From Offering Free Online Tax Filing. Thank TurboTax.

A bill supported by Democrats and Republicans would make permanent a program that bars the IRS from ever developing its own online tax filing service.

Part of the complexity centers on the language in the bill, which states that the government “shall continue to operate the IRS Free File Program” — the program under which tax preparation companies offer free filing and the IRS agrees not to offer its own service. The bill then refers to another text, the IRS’ memorandum of understanding with the industry.

That memorandum contains a promise by the government “to not enter the tax preparation software and e-filing marketplace.”

Wyden’s spokesperson said in a statement that “the IRS chief counsel confirmed to his office that the Taxpayer First Act does not bar the agency from implementing a direct-file program.” Wyden’s office did not provide a full copy of its exchange with the chief counsel, and an IRS spokesman did not immediately respond to requests for comment.

Wyden’s spokesperson pointed to a provision in the IRS’ existing deal with the industry that allows the agency an exit with 12 months notice. But it’s not clear whether the bill nullifies that possibility.

A summary of the bill by the Senate Finance Committee states that it “requires the IRS to continue to work with private stakeholders to maintain, improve, and expand the program.”

The text in question is also something that Intuit, the maker of TurboTax, and H&R Block have long fought for. Identical text, for example, appeared in previous legislation backed by the industry. That bill was titled the Free File Permanence Act.

Critics of the existing IRS deal with the industry have pointed out that, despite widespread eligibility, just 3% of those eligible have actually used the free filing option created by the program.

Wyden also suggested in remarks Wednesday that the Free File provision in the Taxpayer First Act was the result of a compromise with Republicans. “My staff pushed back on a long-standing policy that blocks the IRS from competing with private tax preparation companies,” he said. “I’m going to continue fighting for a ‘simple return’ system and the right to file directly with the IRS online.”

In a “simple return” system, the IRS would send taxpayers pre-filled forms, which people could then review and sign. Many countries have adopted such an approach, which could cut tax preparation to just minutes. H&R Block and TurboTax have also lobbied to prevent the IRS from doing that. 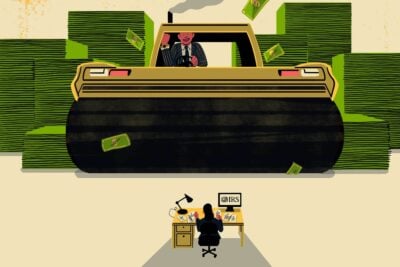