Prompted by a ProPublica story that detailed how Black Americans with diabetes lose limbs at a rate triple that of others, the American Diabetes Association has included an initiative to prevent unnecessary amputations as part of an unprecedented campaign to reduce racial disparities in diabetes care.

“The ProPublica article raised the consciousness of what the problem is,” said Tracey Brown, the CEO of the ADA. “Every four minutes, someone is losing a limb from diabetic complications. That’s ridiculous. We have got to find a way to drive change.”

The story highlighted obstacles to equitable care for diabetic patients at risk of amputation, from the government’s decision not to endorse screening at-risk patients for vascular disease in the legs, to the inadequate incentives for certain specialists to move to underserved areas, to the health system’s failure to consider limb-saving options before permitting surgeons to apply a blade.

In the weeks that followed publication, several congressional and state legislative offices reached out to the association to ask for guidance on drafting policy to reduce disparities in diabetic amputations. In response, the organization decided to build an agenda around the issue.

The ADA’s Health Equity Now campaign, which addresses the cost of diabetes care, nutrition, discrimination and more, was motivated by the racial health disparities that have been exposed by COVID-19, which has hit Black Americans with diabetes particularly hard. As part of the project, the association has built a Health Equity Bill of Rights, asserting that all diabetes patients are entitled to affordable drugs, healthy food, the latest medical advances and other protections.

The right to avoid preventable amputations is the only complication of uncontrolled diabetes that is included in the list. The organization is sharing the document with policymakers, practitioners and patients as it begins to look toward policy change. It is also encouraging members of the public to ask their governors to support the project.

Dr. Ronald Dalman, the president of the Society for Vascular Surgery, said: “I commend the ADA for doubling down on this particular complication of poorly managed diabetes. It’s a long overdue prioritization.” He added that it’s a “moment in time where we can leverage this concern about health care disparities to call out a very specific problem: the prevalence of amputation in certain subsets of the population.”

Dr. Gary Puckrein, the head of the National Minority Quality Forum, a nonprofit focused on reducing health care disparities, said that the ADA’s efforts are just a step. “The American health care system was organized during an era when inequality was acceptable and mainstream in American society,” he said. “It’s not that African Americans are sicker, it’s that the health care delivered is unequal.”

He hopes that the national conversation on health disparities will mirror the conversation about police violence against Black Americans. “You, in effect, have your knees on their neck in the health care system as well when you don’t provide them with the care that they need.” 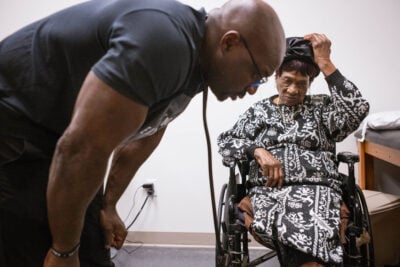 Two weeks after publication of the story, Rep. Bennie Thompson, a Democrat from Mississippi, honored Dr. Foluso Fakorede, the main subject of the ProPublica article, for his work in reducing unnecessary amputations in Bolivar County, Mississippi. The acknowledgement, made in the House of Representatives, referenced ProPublica’s findings.

The co-chairs of the Congressional Peripheral Artery Disease Caucus — Rep. Donald M. Payne Jr., a Democrat from New Jersey, and Rep. Gus Bilirakis, a Republican from Florida — have also begun work on a bill to address disparities in amputations, particularly for people with peripheral artery disease, a condition in which clogged arteries in the legs limit the flow of blood.

“The ProPublica article has brought strong awareness and real interest from a variety of parties — from the medical field and from patients and from potentially future patients,” said a spokesman for Payne. “We have been working with Bilirakis and other members to move this forward, with the ultimate goal of introducing legislation.”

Summer Blevins, deputy chief of staff for Bilirakis, added that their legislative ambition “is based on the basic principle that prevention, education and early intervention is best for the patient and also saves money.”