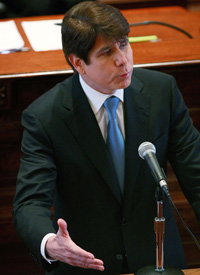 Rod Blagojevich joined the ranks of the unemployed this evening.

Illinois' senators voted unanimously to convict the Illinois governor in his impeachment trial, thereby expelling him from office immediately. Blagojevich, twice elected, is the first Illinois governor to be booted midterm.

And if conviction weren't enough, the senators also voted unanimously to prevent Blagojevich from ever holding office in Illinois again. (Sure, he could always run for president.)

Lieutenant Gov. Pat Quinn, a Democrat like Blagojevich, has been sworn in as Blagojevich's replacement.

Earlier this month, the Illinois House voted 114-1 to impeach Blagojevich, sending proceedings to the senate where the trial began on Monday. Today, all 59 senators voted to convict.

For the first three days, Blagojevich ignored the trial, instead choosing to go on a national media tour. While on tour, Blagojevich referred to the trial as a "kangaroo court," saying "the fix is in."

The governor refused to challenge a prosecutor's evidence or present witnesses because senate rules prevented him from calling witnesses related to his federal criminal case.

But today, Blagojevich returned to the state capital and presented his closing arguments. (In actuality, they were his only arguments).

In an impassioned 47-minute speech, Blagojevich made his case before the Senate, saying he did "absolutely nothing wrong" and "never, ever intended to violate the law."

"I'm here to talk to you, to appeal to you, to your sense of fairness," Blagojevich told senators. "I'm asking you as I speak to you today to imagine yourself walking in my shoes."

They weren't too receptive.

"The governorship was serious business. It isn't show business," said state Sen. Kirk Dillard, a Republican. "After that performance today, I wish him luck on his new Hollywood career."

Sen. Dale Righter, also a Republican, described Blagojevich's arguments as "words and deeds of a devious cynical, crass and corrupt politician, and someone from whom the people of this state must be protected."

Some of the senators noted that Blagojevich is not solely responsible for Illinois' hard-fought reputation as a corrupt state.

What's next for Blagojevich? Well, after he cleans out his office, he might have a criminal trial to prepare for. He was arrested last year on a raft of corruption charges (including for allegedly trying to sell Obama's seat for personal benefits), but has yet to be indicted. His arrest set in motion a weeks-long impeachment process that ended in his conviction today.

Presiding over the trial was the chief justice of the state supreme court, Thomas Fitzgerald, (not to be confused with Patrick Fitzgerald, the U.S. attorney who is prosecuting Blagojevich).