This article is co-published with the Tampa Bay Times and the Miami Herald, which share a state capital bureau in Tallahassee.

The multimillion-dollar effort by Michael Bloomberg, LeBron James and other celebrities to pay off lingering court fines and fees for Florida felons could make almost 13,000 of them eligible to vote in Tuesday’s election, an analysis by the Tampa Bay Times/Miami Herald and ProPublica found.

Although the modest increase in eligible felons falls far short of expectations, it could be large enough to make a difference in a key state where polls indicate that the presidential contest is once again a toss-up.

Among four of the state’s largest counties — Hillsborough, Pinellas, Palm Beach and Polk — about 32%, or 1,518, of the 4,700 felons who had their fines and fees paid by the nonprofit Florida Rights Restoration Coalition are registered to vote in the upcoming election, according to the Times/Herald/ProPublica review.

Across the state, where the coalition used contributions from celebrities and other donors to pay about $27 million in fines and fees for about 40,000 felons, that pattern could translate to about 12,800 eligible voters if the proportion is consistent and they don’t owe other court debts.

The newly eligible voters in the four counties likely skew toward the Democratic presidential candidate, former Vice President Joe Biden. In those counties, at least 80% of felons whose fines and fees were paid are nonwhite — including 74% who are Black. About 68% are registered Democrats, the review found.

The uptick in felons who are now eligible to vote appears to slightly blunt a Republican effort to minimize their turnout. After a ballot initiative granted voting rights to felons, the Republican-led Legislature imposed a requirement that they first pay their fines and fees — a restriction that some critics viewed as voter suppression.

Whether the voters helped by the coalition will actually make it to the polls, however, is unclear. Many still don’t know their court debts have been paid off, and the coalition does not require, or even ask, whether the people whose fees they pay are registered to vote.

“We want communities to get better by having more voices heard, and the quicker people are able to be reintegrated into the community, the better,” said Neil Volz, deputy director of the Florida Rights Restoration Coalition. “If people choose to engage in that moment or not, that’s on them.”

Volz said that the organization has been bombarded by calls from felons seeking payment, and that it has trouble keeping up with the volume. It is continuing to notify people that their fines and fees were paid.

“We are trying to reach out to as many people as we can,” Volz said. “If somebody’s in the queue, we’re going to keep doing our best to make contact with them.”

Michael Simmons, 45, of Riverview near Tampa, is so determined to vote that he paid all of his court debts that he was aware of. He made multiple trips to the Hillsborough County clerk’s office to pay nearly $1,800 in fees on four traffic-related cases, receipts show.

Until a reporter called him the week before the election, however, he didn’t realize that he still owed the county $1,140 for two felonies, a probation violation and driving with a revoked license. The Florida Rights Restoration Coalition paid those fees in August.

“I knew nothing about it,” he said.

He voted early, a week before the election.

Just two years ago, it seemed that Florida’s voter rolls might expand significantly after Floridians approved a landmark ballot initiative known as Amendment 4 that restored voting rights to felons.

But Republican lawmakers and Gov. Ron DeSantis took a hard-line view on Amendment 4. The 2019 Legislature mandated that felons complete “all terms” of their sentences before registering to vote, including paying the hundreds or thousands of dollars in court fees and fines handed down with nearly every felony conviction in the state. Payment of restitution is also required.

Seventeen felons sued the state and the governor over the law. A federal judge initially overturned the restrictions — allowing most felons with unpaid court costs to vote — but that decision was overridden by the U.S. Court of Appeals for the 11th Circuit in September. The plaintiffs have until January to decide whether to appeal to the U.S. Supreme Court.

The legislation likely tamped down registration by felons. If they owe fines and fees, they won’t be stopped from voting Tuesday, but they could face criminal charges if they do. It’s estimated that between 50,000 and 70,000 felons have registered to vote since Amendment 4 went into effect in early 2019. The rate was lower than anticipated by advocates, who had predicted the measure would restore voting rights to as many as 1.4 million Floridians, with perhaps 10% to 20% completing the voter registration process.

The fundraising efforts kicked in soon after the restrictions were imposed. Millions of dollars poured in to help felons, thanks to a network of small-dollar donations from average Floridians and large checks from celebrities including the basketball icons James and Michael Jordan and the singer Ariana Grande. Bloomberg, the former New York City mayor, also helped raise $16 million by calling other donors.

In addition to paying off fines and fees of people who contacted the coalition, the group asked county clerks to provide names of people with outstanding debts below a certain threshold. In Hillsborough County, it originally asked for names of people who owed the court $1,000 or less, and then raised the ceiling to $2,600 as more contributions flowed in. In one case, the person was deceased, but the rights coalition unknowingly paid the fees, records show. Several appear to have moved out of state. 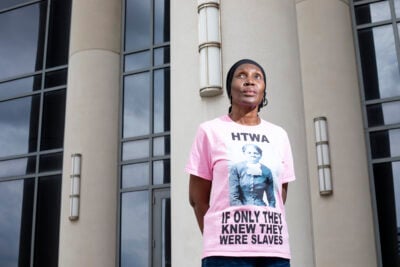 The state’s Republican leaders tried to quash the payments. In September, state Attorney General Ashley Moody, at DeSantis’ request, asked state police and the FBI to investigate if the plan was an illegal inducement to vote after The Washington Post reported that Bloomberg wanted to help pay off fines and fees so felons could vote against President Donald Trump. After Moody called for an investigation, the coalition received threats from white supremacists.

State police last week said Moody’s referral is a “preliminary inquiry” and has not been elevated to an investigation. The FBI’s Tampa field office said it does not confirm or deny investigations.

Moody’s spokeswoman said the attorney general “makes referrals of potential violations of law” to law enforcement agencies, including emails sent to Floridians last week threatening to “come after” them if they don’t vote for Trump. Federal officials later blamed Iran for sending the emails.

To determine how many newly eligible felons are registered to vote, the Times/Herald/ProPublica requested data from the state’s 10 largest counties for a list of people whose fines and fees had been paid by the Florida Rights Restoration Coalition.

The latest analysis found that 12% of those whose court debts were paid had registered to vote since Amendment 4 took effect. That’s a 50% higher registration rate than the 8% of felons overall who were believed eligible under the new law.

It’s unclear why the data shows that most of the newly eligible felons registered to vote before the ballot initiative took effect. Some of them may have been among the 150,000 felons granted voting rights by former Gov. Charlie Crist. Alternatively, others may have enrolled to vote before their felony conviction, been removed from the rolls and then registered again, but state records still list them under the initial date of registration.

The findings underscore the difficulty of getting felons engaged in the political process.

“It’s not as simple as paying off your financial obligations,” said Dan Smith, a University of Florida political science professor who has been studying the issue. “These individuals still have to go through the process to register.”

Desmond Meade, the coalition’s president whose voting rights were restored under Amendment 4, said the program has had other benefits, such as helping felons restore their driver’s licenses. Nearly 2 million Floridians have suspended licenses for failing to pay court fees and fines.

The donations also helped lift the courts’ sagging post-pandemic budgets, Meade said. He singled out Brevard County, where Clerk of Courts Scott Ellis had appealed to the county commission for additional funds to keep the office afloat.

“We were able to go to Brevard County and hand them a check for $551,000,” Meade said. “All of Florida taxpayers are benefiting from our efforts.”

Brevard officials have not yet provided the debt payoff information requested by the Times/Herald/ProPublica, but Ellis called the coalition’s program “fantastic.”

“There’s no doubt that that amount of money helps all clerks,” he said.

Simmons said he followed the coalition’s efforts to persuade Floridians to vote for Amendment 4 and to raise money to help people pay off their court debts.

He said he registered to vote on Jan. 8, 2019, the day Amendment 4 took effect, and has voted three times since having his rights restored, believing he had paid off all his fines and fees. He said he is grateful for the coalition’s help.

“What the Rights Restoration Coalition has done for people, whether they know it or not, is a great thing,” he said. “I almost feel bad, because I didn’t need it, and I got it. But someone who needs it, I hope they appreciate it.”

One Tampa woman, who asked not to be identified, said she reached out to the coalition about paying off her debts but didn’t hear back.

She laughed when told by a reporter that records show a $645 court debt was paid by the coalition on Oct. 12. She was unaware of the payment but said she still won’t vote, even though she’s registered, because she owes an additional $106,000 in fines relating to a prior drug trafficking conviction.