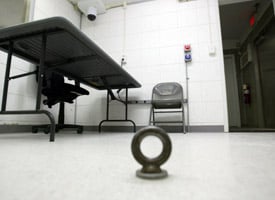 A senior Pentagon official crossed into new linguistic territory to highlight the legal dilemma arising from the abusive treatment of detainees and coercive interrogation practices.

"We tortured [Mohammed al-]Qahtani," Susan J. Crawford told the Washington Post's Bob Woodward, in the first public usage of the "T" word by a Bush administration official. Crawford had not given an interview on Guantanamo since being appointed the convening authority on military commissions in 2007, a position that gives her absolute authority over which detainees are prosecuted, and which are condemned to legal limbo.

She dropped war crime charges against Qahtani in May, without offering an explanation at the time. Now, Crawford tells the Post, "His treatment met the legal definition of torture. And that's why I did not refer the case."

The techniques used on Qahtani and details of his interrogation have been made public before. The New York Times reported a sampling of the methods late last year:

The interrogation of Mr. Qahtani, public military documents show, included prolonged isolation, sleep deprivation, forced nudity, exposure to cold, involuntary grooming as well as requiring him to dance with a male interrogator and to obey dog commands, including “stay,” “come” and “bark.”

Crawford maintained those and other techniques were all authorized and legal -- though Pentagon officials acknowledge that the law has been a moving target since the war began in 2001. Crawford instead opted for a medical definition of torture. "It was the medical impact" -- Qahtani was hospitalized twice with a life-threateningly low heart beat -- "that pushed me over the edge," she told Woodward to explain her ground-breaking word choice.

The FBI created so-called "clean teams" to do a parallel investigation without harsh interrogation. It also concluded that Qahtani had attempted to enter the U.S. in 2001 with the intention of becoming the 20th man on the 9/11 hijacking team. In November, military prosecutors brought new charges against Qahtani, but Crawford told the Post those wouldn't stick either.

"He's a very dangerous man," she said. "What do you do with him now if you don't charge him and try him? I would hesitate to say, 'Let him go.'"

Crawford , a "lifelong" Republican, tacitly supports the Bush administration's military commission system for prosecuting terrorists but has criticized its implementation. The Post has described her as a "Cheney loyalist," but in the interview, she called for "someone" to take responsibility for the moral and legal mistakes. "I think the buck stops in the Oval Office," she told the Post.